It is often said that the character of people is best tested in times of crisis. This has been true for many South Africans over the years and during the past six months or so of COVID-19.
Known to be generous by nature, and easily taking the side of the weak party in any conflict situation, many South Africans rose to the occasion and – driven by the spirit of ubuntu – started initiatives that enabled them to play their part by taking care of the weakest in our society.
In no time, many feeding schemes were established by individuals, neighbourhoods, small and big companies, non-governmental organisations and others, to prepare and distribute warm food and clothing to people living in the streets and to indigent neighbours and poor people in communities on the other side of town.
Others offered to use their motor cars and cycles to deliver medical supplies to the elderly and people living alone with various forms of disabilities in their respective neighbourhoods and elsewhere.
To outsiders, the seeming contradiction in the conduct of South Africans would be baffling. On the one hand, they stood up and demanded that the government speak with more clarity when it explained the rationale for the various lockdown restrictions while, on the other hand, they never forgot that we’re all in it together when they played their part to ensure that as few South Africans as possible, if any, where left behind during this testing period of an unprecedented health and economic crisis.

Thulisile Manzini, the acting CEO of Brand South Africa, says: “There is an opportunity for leaders to realise that in order to be won, the battle against COVID-19 can neither be led nor won by the government alone.
“It should never have to be a competition of wills and might pitting any group of South Africans against others, or citizens against the government. We have to reignite the nation’s social compact and fighting spirit to positively channel them in a shared drive to curb the spread of the real enemy of our times, the pandemic that is silently making its way within our population taking many lives before their time. We are South African. We have the fighting spirit; we have one another, and we have our spirit of ubuntu.”
Manzini called on South Africans to “rally these assets to effectively push back and defeat COVID-19 so that we can safely turn our focus to saving our economy. The more time we waste bickering over who is right and who is wrong, the harder it will be to step in in time to rescue our ailing economy against certain destruction.”

A Conversation Brought To You by the National Lotteries Commission Johannesburg - A conflict of duty happens when a person is required to fulfil two...
Read more
Sponsored Content

Is it necessary to save for schooling? You do the maths …

November 2020 With many parents waiting anxiously to hear if their children have been placed in Grade 1 and Grade 8 in 2021, the other...
Read more 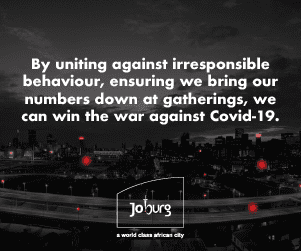