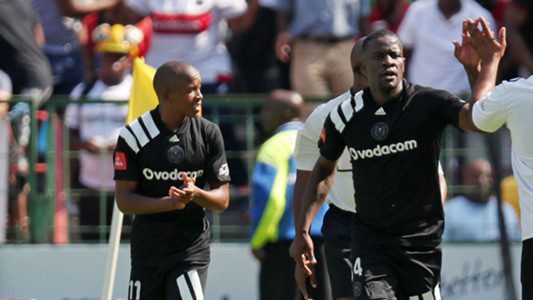 Against a rather lethargic Orlando Pirates especially in the first half, Stellenbosch FC travelled all the way from the fairest Cape and stole a point in this 1-1 drawn DStv Premiership clash at Orlando Stadium on Wednesday night.

Stellies started like a house on fire invading the Pirates danger area at ease on numerous occasions, with the likes of Lelethu Skelem and Marc van Heerden making forays into the home team’s danger area.

The visitors dominance, capitalising on the Pirates’ disjointed midfield was however short-lived as they conceded in the 32nd minute despite having the upper hand.

The Buccaneers goal came from an unlikely scorer when defender Ntsikelelo Nyauza tapped in the ball from a corner kick taken by Kabelo Dlamini following a goalmouth commotion.

Pirates looked a much revitalised side after coach Josef Zinnbauer introduced Zakhele Lepasa and Terrence Dzvukamanja at the start of the second stanza.

Lepasa led the Bucs attack coming close to scoring to give his side the lead but it was not to be as Alan Robertson and Robin Johannes were forced to make dramatic off the face of goal clearances.

Forward Gabadinho Mhango started with a niggling injury, limping throughout the first half and had to be substituted by Lepasa.