Chomane Chomane also allegedly agreed to return the royalties that he had received  while posing as a composer of songs by the artist over the past 30 years.

The agreement is said to have been  reached at a meeting at the Southern African Music Rights Organisation’s (Samro’s) Joburg headquarters  last month, facilitated by poet and musician Mzwakhe Mbuli, and musician Tronix Madibe.

However, the jury is still out on how the parties will resolve the same issue involving another Lesedi FM presenter, Thuso Motaung, who also allegedly benefited from the bribery scheme, which defrauded the SABC of millions of rand.

Mthethwa dropped a bombshell when he confessed to having credited Chomane and Motaung as composers in exchange for high rotation on Lesedi FM.

He said the elaborate payola scheme resulted in Chomane Chomane and Motaung collecting royalties from Samro, despite not being involved in the production of the tunes.

News of the alleged agreement emerged when a statement was circulated on a WhatsApp group formed by Samro-affiliated artists.

The statement reads in part: “We would like to thank Tronix Madibe and Mzwakhe Mbuli for their support towards William Mthethwa during a mediation process that took place at Samro regarding the unpaid royalties that date as far back as 30 years,  whereby a complex payola agreement system was secretly entered into between Dephon Record Company, owned by Phil Hollis, and very prominent radio DJs in the likes of Thuso Motaung and Chomane Chomane …”

The statement further said the two radio personalities  “would then place William Mthethwa’s music on high rotation during their slots in exchange for royalty percentages, some as high as 33%.  So, the progress made today is that Chomane Chomane has confessed to the status quo,  relinquished the rights back to William Mthethwa, and agreed to pay back all monies he received under this arrangement.

“We welcome that the Hawks investigation is continuing into these fraudulent activities that also robbed the SABC of revenue that could have been made had the likes of Dephon paid for airplay above board.”

Mthethwa confirmed Chomane Chomane agreed to relinquish the royalties rights to him and to pay him back.

“Samro auditors are busy with the auditing process to determine how much  those royalties are (including my retirement funds).”

Chomane Chomane referred us to Samro, which also declined to comment.

Madibe confirmed that Chomane Chomane has agreed to relinquish the royalties to Mthethwa and said they were excited with the progress they made with the matter.

Motaung could not be reached for comment as he had not responded to enquiries at the time of going to press. 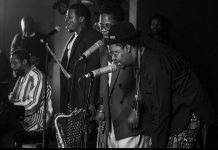