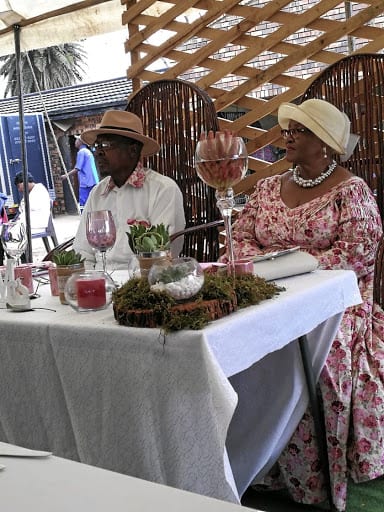 As we celebrate the month of love, this recently married couple remind us that it is never too late to find love.

Mmathipe Khoele, 67 and George “Ponti” Khoele, 71, are living proof that the love bug can bite any time and anywhere, irrespective of age.

The lovebirds from Hammanskraal, north of Pretoria met at a funeral in 2006.

Khoele, a retired school principal, says he was smitten with Mmathipe the moment he laid his eyes on her.

He says it was during his uncle’s funeral when Mmathipe’s radiance caught his attention.

“Her beauty attracted me and for a moment I forgot that I had just buried my uncle.”

For Khoele, it was love at first sight, but Mmathipe, a caterer, was not ready to love again. She had just come out of a bitter divorce and wanted nothing to do with men.

She gave Khoele a tough time as she spurned his advances, but he did not give up on her.

He pursued her for a year before she could relent to his love proposal.

For Lekhoele to win her heart, he had to produce his divorce decree and identity document as demanded by her to prove that he was not married.

“I wanted solid proof that he was a divorcee because I did not want to be a marriage wrecker,” says Mmathipe.

“I also wanted proof that he was not younger than me, the reason I demanded to see his identity document,” she adds.

Mmathipe, a mother of three and grandmother of four, says she was humbled by Lekhoele’s patience and honesty.

“For pursuing me for such a long time and producing those documents earned him a special place in my heart.”

It's been three years since model and influencer Sarah Langa married Jehan Mackay in fairytale style-themed (wedding) ceremonies. She maintains he is still her yin...
Read more
Tips & Tricks

‘It was a hot day,’ says bride who popped into shop during wedding

All that newlywed 21-year-old Zaakiya Achmat wanted was to stretch her legs, have a snack and a refreshing bottle of cold water after hours...
Read more