Local stars excellent in roles on drama
Just like Joaquin Phoenix, who gave a sterling performance as the Joker, Natasha Thahane and Sophie Lichaba deserve accolades for their performance in local drama Lockdown.
Thahane, who first honed her skills as Claire in the SABC 1 soapie Skeem Saam, joined the cast of prison females last year.
The 24-year-old plays the role of Katlego, who this season sees herself as a prisoner in a mental institution, where Palesa (Lichaba) runs the show.
Thahane said she embraced the role because it’s important to stop the stigma of mental illness in black communities. 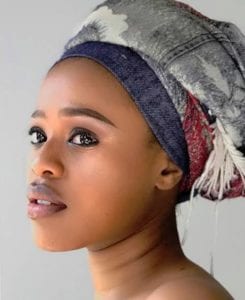 “A lot of people in the black community suffer in silence. They don’t seek out mental healthcare and that needs to change. We need to start having conversations about mental health throughout the year and not just as a story line on a particular day. My heart really goes out to everyone who is suffering, struggling with mental health. Please know that you are not alone. I pray that the storyline helps you and you feel empowered to speak up,” she said
Comparing herself to Katlego, Thahane said even she goes to therapy whenever she feels down and has her mom to turn to.
“In contrast, Katlego feels alone. The similarities are that she wanted to be a musician, I am in the arts. She wanted to make it, she wanted more from life and wanted to be greater
than she is. I desire that as well,” said Thahane.
Having studied performing arts at the New York Film Academy, Thahane said she was really excited for 2020 because it’s her year of growth. In April there is a show I shot with Netflix coming out.  But my biggest goal and prayer for this year, because I have been so blessed by God, is to be a blessing to others.”
Lichaba, who plays Palesa, said the role has revitalised her.
“It feels like a fresh start. Everyone’s been typecasting me. One journalist asked if I thought anyone would ever believe me as anyone other than Queen in Generations. But Lockdown just changed everything – Palesa is the opposite of what everyone knows me to be. She’s going to delete Queen from everyone’s mind,” said Lichaba.
“Finding Palesa and relating to her was not difficult for me. I identified with her pain and trauma. You can see the difference between what she used to look like and what she
looks like now, which is my personal journey, my personal battle that I’m still fighting,” she said.
The modest Lichaba attributed her brilliant performance to Mandla N, the show’s director, who she said deserved an award for the performances he had drawn from the whole cast.
“Mandla is the god of directing.”
After Lockdown she will be seen in Family Secrets, set to air on smartphones.
By Somaya Stockenstroom