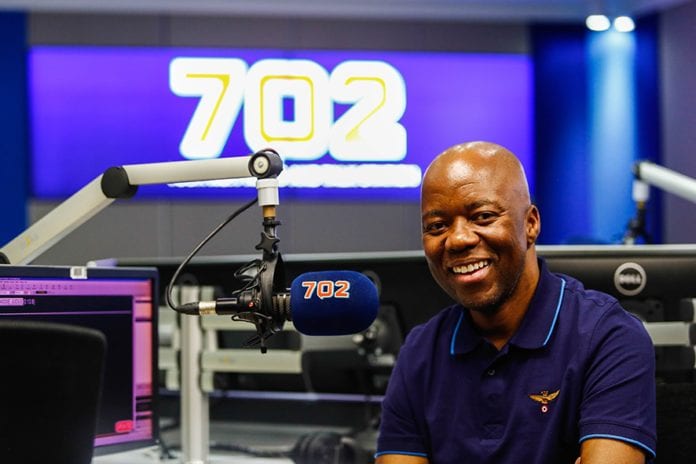 Veteran broadcaster Xolani Gwala drew his last breath on Friday when he lost his battle to colon cancer.

Presenters struggled for composure when reading the news on air, the mood dampened at Primedia in Sandton, home of Talk Radio 702, as it was throughout the country.

Many went on social media platforms not only to share their pain, but also to pay tribute to this giant of journalism. This, as Mzansi was also remembering the death of Rowena Baird, former SAfm presenter who also died of stage 4 colon cancer in October last year.

Gwala was 44 when he first spoke about his cancer during an interview on 702 in September 2017.

He went into remission after having surgery in June last year and returned to the airwaves 10 months after being diagnosed. His recovery was remarkable as the cancer was at an advanced stage when it was first found. Colon cancer, according to the World Cancer Research Fund,
rates among the top three most common cancers, with the other two being lung and prostate cancer.

It is said to be common among people aged 50 and older – but like with Baird and Gwala, it can occur in younger people, even teenagers.
Baird, who was in the industry for 35 years, spoke of her difficult journey with the disease in an interview with SAfm’s Bongi Gwala shortly before she died. She spoke of how she had to use a walker or “else I’d just fall at the most unexpected of times”. She also spoke of how her sister, Michelle, had to accompany her everywhere.

She came on the show to tell her listeners that the disease forced her to quit her career. Gwala’s distraught wife, Peggy Sue Khumalo, was hopeful that the cancer would never return.

But this week she penned her thoughts after he died.“Xolani won his battle against cancer not only for himself but for many others and was a fierce campaigner for cancer awareness and early detection.

Since the public announcement in September 2017, myself, Peggy Sue Khumalo, and Xolani, together with our families, have been deeply touched by the massive outpouring of love and ongoing support of so many South Africans.

Xolani was an inspiration and mentor to so many colleagues, friends and listeners over the years. We thank you for your heartfelt messages, these have meant so much to us. Siyabonga.

“Your thoughts, prayers and best wishes have made an enormous difference and helped us cope. You gave Xolani enormous strength as he recovered from liver surgeries and underwent his treatments while always maintaining his infectious laugh and  sense of humour.

“We were hopeful and always knew the gravity of the situation. From February to June this year, Xolani took part in a world-first clinical
trial in Israel. His medical team has been amazing, and we have enormous admiration for the work they are doing in advancing cancer treatment.

“While the miracle did not materialise, these last few months have been precious and we are eternally grateful that Xolani has been able to spend them with us as a family. This journey has made our family much stronger and has brought us together,” reads the letter in part.

As Gwala’s recovery failed to gain traction, it left a feeling of helplessness among those suffering from cancer. Can it be beaten? What do we need to do? Speaking on the passing of his wife to cancer, former Bafana Bafana star Lucas Radebe said: “You think, as a man, you have to be strong for the kids. But inside I was breaking. I didn’t know how I was going to cope. Fezi had helped me throughout my career. She helped make me
strong. And then she just wasn’t there anymore”.

The Colon Cancer Coalition urges men and women to have screenings regularly as it can affect people who previously had no known risk factors.

Dr Boitumelo Mosimane, a specialist in thermography, says breast cancer and lung cancer are just as common and deadly. The South African
doctor has since introduced a ground-breaking tool that can identify breast cancer risk years before a detectable lump can form – through infrared thermal imaging.

Mosimane explains that the infrared thermal imaging makes use of an infrared camera to detect heat radiated from the body.

Mosimane explains that nutrition and lifestyle risk factors are identified and strategies for modification recommended.

“Integrative therapies are recommended, depending on the level of risk and the health profile. These can include nutritional and herbal supplements to boost immunity, optimise detoxification and hormonal balance. IV nutrition therapy can also be recommended. Increase vegetable and fruit intake, limit alcohol and meat consumption, limit calorie intake, eliminate sugar and processed food. Lifestyle changes include optimising physical activity and smoke cessation . ”

Shwashwi: When is Sizwe Dhlomo getting booed up?