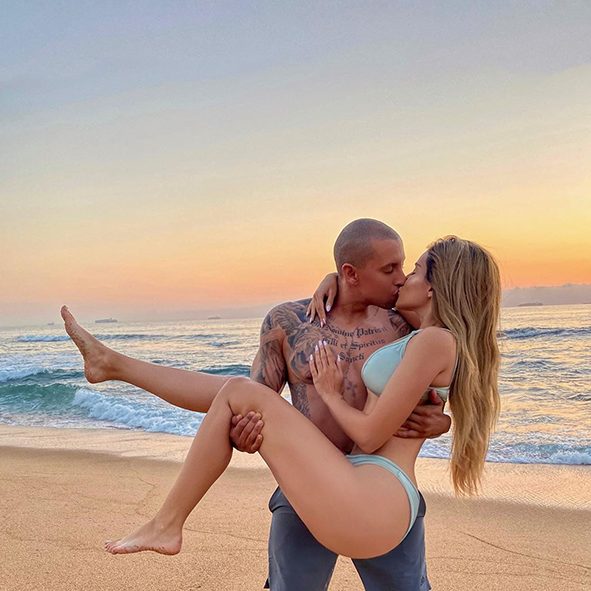 Warras was hiding behind new flame all along…

Warrick Stock, better known as loud mouth DJ Warras, has been off the radar.

Kante he is canoodling with this “influencer” called Reo Brydges. Shwa is not sure whose prettier – the macho-looking Stock or the Barbie doll. Those expensive beauty treatments are paying off, Warras. 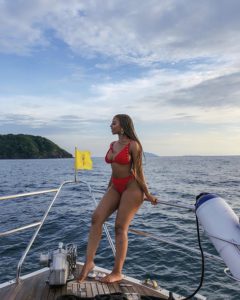 When the world of influencers come crushingdown, Shwa will have the last laugh. They just say the most random things like Mihlali Ndamase on
some insincere vibes. She claims she is not comfortable wearing revealing clothes in SA.

Bhwaaah! Say what? “I don’t know why, but when I travel I can wear the shortest shorts, even G-string swimsuits. I’m 10x more comfortable in another country than I am at home. Yikes,” she ranted on a now deleted tweet. Yet – all she does is reveal herself. Now we see why you dyed your hair blonde – you blaary blond!

Yet another huh in the local rap scene 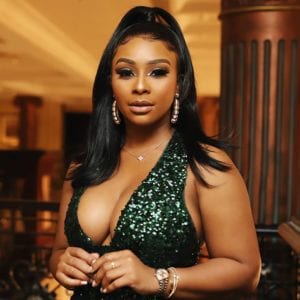 Shwa finds it really hard to believe Boity Thulo is the first female rapper to reach platinum. Wuz dat? Thembi Seete’s confusing rap line on It’s About Time was better than both Thulo’s tracks. Yes, I said it! 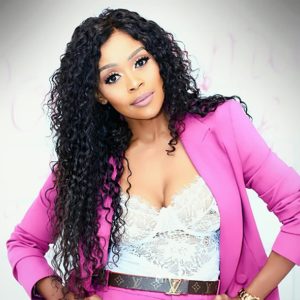 Zolani too deep on the rooftop

Freshly Ground may be in the stone ages, but Zolani Mahola is trying to stay relevant by reviving her solo music career.

It’s been an amazing year! When it started I had no idea that it would end in so many revelations, would see me taking ownership of my voice and story, see me digging deep and finding me… at the heart of it all. The theatrical production of my life (so far) was a massive success because I was able to be me. Authentically and fully. I would like to now thank the people who made it possible. My friend Rebecca Oppenheimer – you who stood and cheered your loudest and gave support where I needed it most. Thank you. To my director @faniswa_yisa – a real honour and feat to create with you! For giving my words their shape and life thank you Jeremy Handler. My dear creative partner @aronhalevi – MAGIC!!!! The best creative director @angelanemov ; Uber Producer @warrenwil ⭐️ @larissa_foot who said YES when I walked into the @baxtertheatre and said I wanna do a play I don’t know what but please make it happen THANK You! My number one golden girl @gold_redemption – you held me down! Thanks for the true support @setso.s and @mimimakapela. The support of Aki Khan @eastern_acoustics_pro_audio I can’t overstate! Thanks George! My sponsors @digicapesa @rolandmusicsa @paulbothnermusic THANK YOU Big love and thanks to my Husband @nicklemp cos you are just my idea of Wonderful. I love you. Thanks to the Mahola family. Our story continues. To those who saw the show thank you. Share your story. To the rest … 2020 I will bring it to you. All love #theonewhosings

At the Johannesburg edition of her Rooftop Revelations in Rosebank, she was candid about her life and journey to her upper-class white fans. Thanks to the endless supply of bubbles, Ms Doo Be Doo is now on some Adele tip. Too deep for Shwa.

Not quite the isigubu of old …

The much-anticipated album, From Bongo with Love, was launched at the Universal Music headquarters this week, with Thandiswa, Stoan, Jah Seed and
Speedy showcasing their latest work. 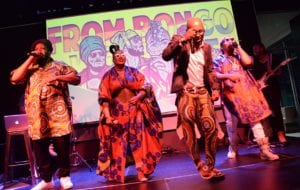 One would expect local giants such as Bongo Maffin not to struggle to draw in a crowd with their isigubu (drums).

But, after over 15 years of not making music as a group, Shwa noticed a level of awkwardness on stage.
The sound and crowd really made the legendary musicians feel like fish out of water when they tried to introduce their 17-track album.

The only song that is ready for the festive season is Gimme Joy.

When someone talks about forever drip, Speedy takes the title. He is forever a superstar of this group. Pity his solo career never really took off, which is why he had to beg his band members to rekindle their magic.

Thandiswa and Stoan made this launch a family affair with their daughter jumping on stage to sing along to their music. Ncoo! And the usually stiff Stoan was on some amapiano tip. Uncle Bae…Cute yaz!

Jah Seed almighty is old yazi. Why not just leave the jahman alone in his corner to do the irie things of life?

Hot property for sure, handle with care, Boetie 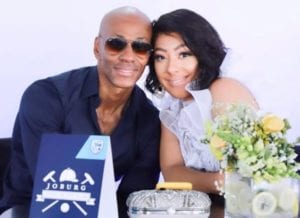 Kaizer Motaung Junior seems to have found solace in the arms of actress Mbali Nkosi. Boetie, let this be for keeps and not just a Dezemba fling. Nkosi is hot property and clearly smitten.