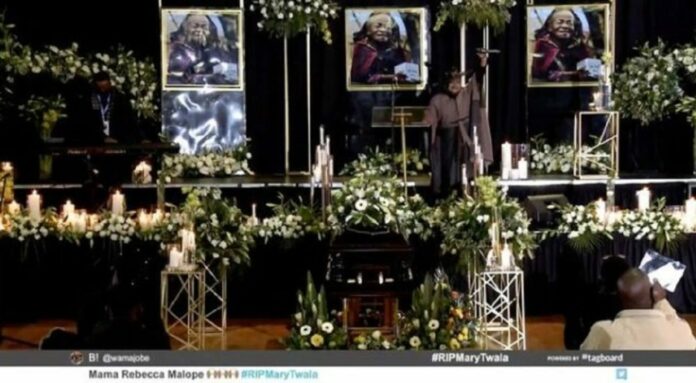 Mary Twala received a Hero’s farewell as she was laid to rest today.

Under unusual circumstances, as the world fights a global pandemic, Twala’s funeral service was held at the Grace Bible Church in Soweto.

Her son, Somizi Mhlongo showed a brave face to give a heartfelt tribute to his beloved thespian mother, who was 79. He said he may have lost a mother but has since gained a powerful ancestor.

“My mother was very successful at home and in her professional career. Her work ethic was outstanding. She was very generous and very optimistic.

“I am not sad that she is gone, I am sad because my umbilical cord has been cut. I’m so [at] peace with what my mother achieved because she saw me walking down the aisle, she saw her grandkids and great-grandkids being born” he said.

“I know that my mother was appreciated and loved by South Africans and received that love while she was still alive. I thank her for instilling everything that I am today,” he said.

She had been in and out of the hospital for several months with illness.

Twala’s final public appearance made at her son’s white wedding day in January.

The fallen icon is known for her various roles such as the Gibson Kente production Scalo, Generations, Sarafina, Paradise Stop and Beat of the Drum.

She recently starred in popular tv shows such as Beyond the River and Mzansi Magic’s, The Imposter.

Twala’s acting careers spanned over 60 years, staring her career at a tender 19.

Tributes for the icon poured in as many South African mourn the legend.

Thuli Madonsela wrote: “Heartfelt condolences @somizi, on the passing of your mom. May memories shared act as a source of solace for you, your family and your mom’s fans. #RIPMaryTwala”

Mbuyiseni Ndlozi said: “Mary Twala #RIPMaryTwala… deepest condolences to you brother @somizi. May her soul rest in perfect and eternal peace! Her impact on our screens was thorough, complete and indisputably legendary!”