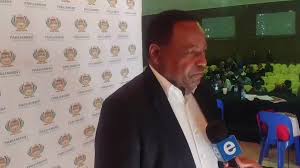 United Democratic Movement deputy chairperson Mncedisi Filtane has died due to Covid-19, a day after the party’s senior leader Mongameli Bobani was buried owing to the deadly virus.

UDM president Bantu Holomisa said Filtane, an MPL in the Eastern Cape Legislature, was admitted to hospital with low oxygen levels and died early this morning.

“We have lost a gentleman and a father. We at this time extend our sympathies to his wife, children and family as we gather them in our thoughts and prayers,” he said.

Bobani, the former mayor of the Nelson Mandela Bay, was buried in Port Elizabeth on Friday.

He died last Wednesday of Covid-19 complications, after spending three weeks in hospital.

Filtane’s death came as concerns grew regarding the increasing number of new infections in the run up to the festive season.

Daily new cases of Covid-19 hit the 3 000 mark on Friday, raising concerns that the country could be headed for a second wave in the festive season. However, Health Minister Zweli Mkhize yesterday reported 2 646 new cases.

The total number of those who have been killed by the disease now stands at 20 845.

The cumulative number of Coronavirus has reached 765 409.

GBV Command Centre shines light in the dark for victims