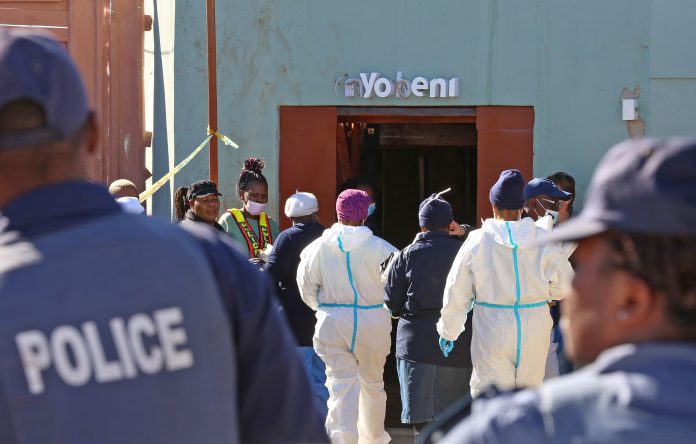 Government pathologist Dr Solomon Zondi believes the Enyobeni tavern victims died from a gaseous explosion on the ground floor which resulted in asphyxiation.

Twenty-one school-going teenagers died at the tavern in Scenery Park, East London early on Sunday morning, where they had converged to celebrate the end of term two of the school calendar.

Zondi described the incident as the worst disaster he had had to deal with at the Brookwood mortuary, other than the Kei Cuttings bus crash which killed about 31 passengers in 2021.

“Something gaseous exploded somewhere at the ground floor and caused asphyxiation. We are just waiting for toxicology to confirm what we are suspecting,” he said during the post-mortem examination of the deceased bodies.

He said those that were highly affected by the gaseous substance were at close proximity to the source of the explosion, noting that during the post-mortem examinations, he was cautious to not inhale any odour emanating from the bodies. At one stage his heart started racing as he examined a body.

“I was becoming dizzy and had to stop for a while,” he said, ruling out any possibility of a stampede and said injuries found on some of the victims were as a result of them falling on their face down.

Zondi added that he does not believe there was anything poisonous in the food because there was not anything in common with the victims’ stomach contents. Another possibility, he said, could be that the deadly substance was swallowed in something the tavern patrons drank.

“Some had chicken wings and some chicken feet, some had rice and others carbohydrates meals, but for some it was pure alcohol. So, the stomach contents were not uniform, but we are not ruling out something that was ingested.”

His investigation with two other forensic pathologists started at the crime scene where they spent hours examining each of the 18 bodies that had collapsed and died inside the tavern before the bodies were transported to the forensic laboratory for autopsy.

He said: “The incident took place on the ground floor, that’s where this pandemonium started, where children were actually falling down like flies.

“And the bodies that we picked up on the top floor were picked up by the bouncers, for proper ventilation, because if you look at the scene, the ground floor is poorly ventilated. There’s only one door there, and there are no windows. At the top there are windows, ventilation is better.”

He said all the evidence is crucial in assisting the investigation to get a clearer picture of what could have happened on that fateful night, adding that every consumable item that was found there would play a crucial part of the evidence.

Everything discovered from everyone who was at the tavern, including those admitted to the hospital, video footage and crime scene photographs are the crucial pieces of evidence needed to conclude the investigation.

Meanwhile, the Buffalo City metro has since moved the memorial service to Saturday. The municipality said it has donated free gravesites for all the victims. And the giant funeral policy insurer, Avbob, said it would sponsor each of the 21 funerals with storage, coffin and burial.