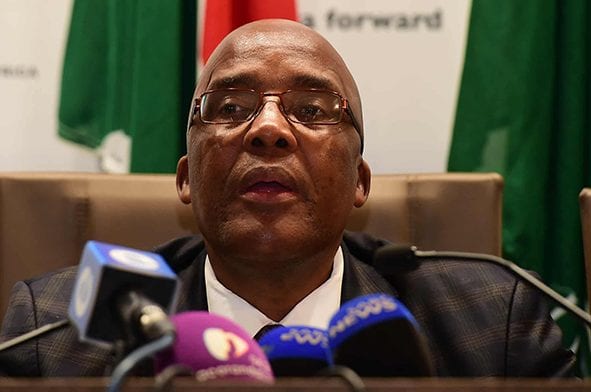 Johannesburg – Home Affairs Minister Dr Aaron Motsoaledi has announced the suspension of several services rendered by the Department of Home Affairs under level 3 of the lockdown.

This as the number of death certificates issued by the department has been on the increase.

Addressing the media on Tuesday, Motsoaledi revealed that since December the department, has been issuing a high number of death certificates. The figures, he cautioned, are set to spiral further by the end of January.

To remedy the situation, Home Affairs offices have extended their operating hours until 7pm.

“We will be extending operating hours to 7pm to accommodate those needing to register deaths and births. This will be available from now until 15 February,” he said.

“You might remember that at the beginning of the pandemic and the subsequent lockdown, DHA services were suspended in order to reduce the number of people who visit offices and to limit the risk of infection because social distancing is difficult when there’s a large number of people gathering,” he said.

Beyond this, the Minister said public service rules called for only 1% of staff report for duty.

“Unfortunately, the impact of what we did in October had an effect of taking us back to pre-COVID days where huge crowds gathered at Home Affairs offices but not observing social distancing,” said the Minister.

In December, senior managers – including the Minister and his deputy, Njabulo Nzuza – visited all provinces to monitor compliance with lockdown regulations.

During these visits, Motsoaledi said it became clear that while protocols were being observed inside the offices, it was the polar opposite in the queues outside, with the public disregarding even social distancing markings.

“We thought this would improve in time but it only got worse,” he said.

Between March and December, 266 of the department’s 412 offices had to close at some point due to staff testing positive. During this period, 532 staff tested COVID-19 positive, largely in Gauteng, Eastern Cape, Western Cape and KwaZulu-Natal offices.

Alarmingly, 116 officials tested positive in the first eight days of 2021, revealed the Minister.

He said this also coincided with the death of seven front office staff.

“Indications are that figures would have increased significantly by the end of this month,” he said.

“But on the fourth and fifth of January 2021 – just the first working days of this year – Home Affairs [had] already registered 10 582 deaths. If this trend continues, there’s going to be a greater demand and it will get worse,” said the Minister.

Confronted by the grim reality, the Department has decided to temporarily suspend certain activities and services.

“This is very unfortunate but we are forced by circumstances. We were guided by statistics. Of all the people who visit [our] offices, 29 % are people collecting smart IDs, 16% are applying afresh for smart IDs, 11% come to be issued birth, marriage and death certificates [while] 10% come to apply for temporary IDs,” he said.

The DHA has suspended the application for smart IDs, with the exception of matriculates applying for IDs.

Applications for passports (except for those permitted to travel in by the Disaster Management Act regulations), marriage registration and solemnisation of marriages are also suspended as is the collection of IDs.

“I know this will be difficult but please bear with us as we save lives. Please don’t come to collect IDs unless you’re specifically invited to do so via SMS. We’ve decided to change the modality in which we operate, we are proposing that all births and deaths be registered at health facilities at which they took place,” he said.

Turning his attention to the closure of 20 land borders, the Minister reiterated that these would open in exceptional circumstances. Among the affected are the six busiest border posts, Beitbridge, Lebombo, Maseru Bridge, Oshoek, Ficksburg and Kopfontein.

He called on individuals who do not fall in these categories but believe their cases are worth consideration to write to his office for exemption.

Those who will apply for exemption will have to provide copy of their passport, copy of temporary residence visa, as well as demonstrate exceptional circumstances for the request to enter the republic, the number of days of one’s intended stay, and proof of residence when they are in the country.

The documents should be emailed to .

Those who are allowed to enter the country are still subjected to COVID-19 regulations such as producing a medical certificate not older than 72 hours, clearly indicating their negative COVID-19 test.

“There’s been a lot of problems at land borders with people coming from holidays and wherever they’ve been, this has necessitated that we close these and limit services,” she said.