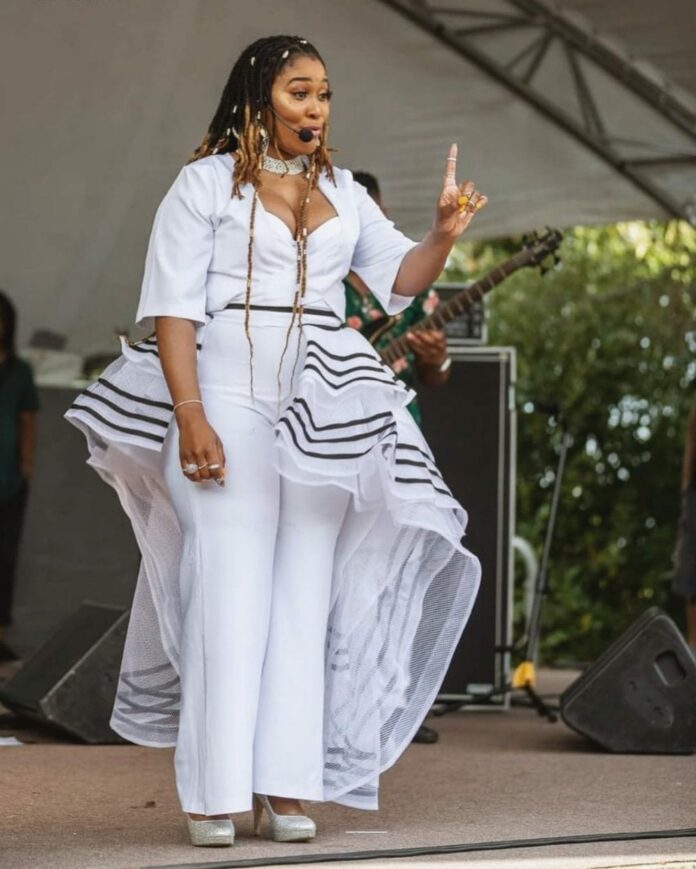 Lady Zamar just went live on her Instagram account to speak about her alleged rape ordeal by her then boyfriend and fellow artist Sjava.

Sjava had earlier today released a video claiming his innocence and that he was being punished and pronounced guilty without trial resulting in loss of income and gigs.

In her live feed this evening, Lady Zamar said before the alleged rape, there was no romantic relationship  between them. She claims they were simply getting to know each other and there was not even a whisper of sex.

She said she had a breast reduction done in July 2017 and was told by her doctor that she wasn’t allowed to have intimate relations for at least six weeks.

Sjava, claimed in the video today, that he had embarrassed Zamar at an event at the Sun Arena, in August that year, by announcing he was in another relationship, and was sorry for that.

But Lady Zamar said at the event, she was medicated with pain killers and still bandaged when the musician invited her to his room.

“The relationship was a getting to know you type of situation. I don’t know what he told his friends and family. There were no sexual conversations. He had never seen me naked before. We were chilling at the event. Fast forward to around morning, that morning we were making out. Just kissing. We had never been alone together to that extent. I went to his hotel room because it was day time. He starts taking off my clothes. And he raped me. I couldn’t fight, I was in stitches. I was bleeding. I hated him. At that moment I was afraid of him. The thought of him terrifies me. That day he got me to go back to his place. We ended up breaking up….Most confusing thing. Am I with this person or not?  I had never been violated before. I didn’t know how to feel about this thing,” she said.

She said she was  exhausted from having to defend herself.

“He said I came up with the rape claims. I didn’t come up with it because I have more to lose as a black woman. I got text messages from him. I blocked out the incident. No woman on the planet knows how to contextualise rape,” she said.

She said she had stopped eating and developed acne but told her friends that she thought the op had messed up her hormones – she has still not registered that the incident had taken a psychological toll on her.

“I got text messages from him. I blocked out the incident. No woman on the planet knows how to contextualise rape. I didn’t accept it myself. We hardly had a real relationship. I believed him when he says he treats me badly and he is sorry. He would say to people, men don’t date women who are abused.

She said that in July 2018 she told him that she couldn’t live in fear and be treated like rubbish.

“There was a recording released….that went around. That recording was taken in 2018 August. We were not together at the time – he was using my vocals on his tracks and I told him not to, I sent him a letter. There were pics of us wearing white, I had a Christmas party in  January 2019. He was accusing me of having a relationship with a musician signed to Universal, I found out later it was his friend. He said – ‘if you’re not with me it means you are sleeping with that guy.’  He asked the photographer to take the pics of us but we were not together. I still had not come to terms with the fact that he raped me,” she aaid.

Lady Zamar said he called her to explain pictures of him with someone else at the Durban July.

“He said he wants to talk. I thought he wants to talk and apologise. He took me to some producer’s house. He said to me verbatim he doesn’t care what I have to say…He literally said to me when he was dropping me back home. I realised that day he had malicious intent. He said to me I was lucky that he isn’t  one of those men who would beat up a woman and leave  her on the street. I couldn’t believe it.”

She went on to say that he resorted to stalking measures and knew when she didn’t attend planned gigs and even when she was at the mall.

“The case is pending, the justice system may not be perfect but I have faith. More often than not you are hurt by people you know. My body is mine. My boyfriend at the time, said to me If I don’t get this out I will never heal. I am healed. I am living my life. I am not trying to intentionally ruin his life. The truth will never stop being the truth. What I do know is that Jabulani raped me. I couldn’t fight him, he is huge. I said no . I was bandaged and stuffed with pain killers. I won’t have somebody lie about me. He lied about me for years and I kept quiet. …I am at a place where I am able to speak about it. Strength to every woman fighting this battle. Rape is not an easy thing to bear on your soul, but it doesn’t define me.