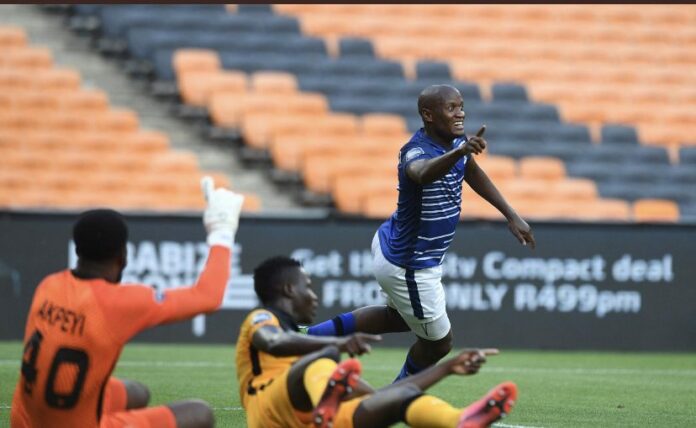 Johannesburg – Maritzburg United’s forward Judas Moseamedi became the toast of former Kaizer Chiefs coach Ernst Middendorp after scoring a brace to earn his side a much-needed 2-0 victory over the beleaguered Amakhosi at FNB Stadium last night.

Middendorp was at the receiving end of Moseamedi’s wrath when he was still coaching Chiefs after the striker’s brace sent Amakhosi crashing out of the Telkom Knockout at the semifinal two season ago.

Chiefs defender Daniel Cardoso made a return to the starting XI after an absence from the side that did duty in the CAF Champions League but it was the same Cardoso who nearly caused them a goal by playing a dangerous back pass to keeper Daniel Akpeyi. Fortunately the keeper cleared it to thwart the advancing Moseamedi.

Bernard Parker and Khama Billiat tried to put the home side in front but it was not be. Even the return and introduction of striker Samir Nurkovic could not turn the match around. Chiefs are 14th on the log, won one, drew four and lost four.

Moseamedi opened the scoreline after receiving a long-range shot laid on by substitute Gadinkame Modise. Ten minutes to the end, Moseamedi buried the Glamour Boys after intercepting a pass in the small box, turned quickly and shot past Akpeyi inside the far post for his second goal.

Had it not been for the alertness and agility of Baroka keeper Oscarine Masuluke, the margin of the defeat could have been tripled.

Masuluke ensured he kept Bakgaga in the match, but was unfortunate to be beaten twice in the second half when Lyle Lakay and later in the added time Themba Zwane, each put one past him.

Attacking midfielder Zwane made his comeback from injury by duly signalling his intention to dominate the scoring charts as his side bids to remain at the top of the PSL log summit at the end of the first round.

Although striker Peter Shalulile received most of the attention from the Baroka defenders, in particular Denwin Farmer, he managed to break off from his challengers and bombard Masuluke several times, but the keeper was equal to the task. Farmer was later sent off for holding back Shalulile, pulling him with his jersey inside the box as the goalgetter tried to score.