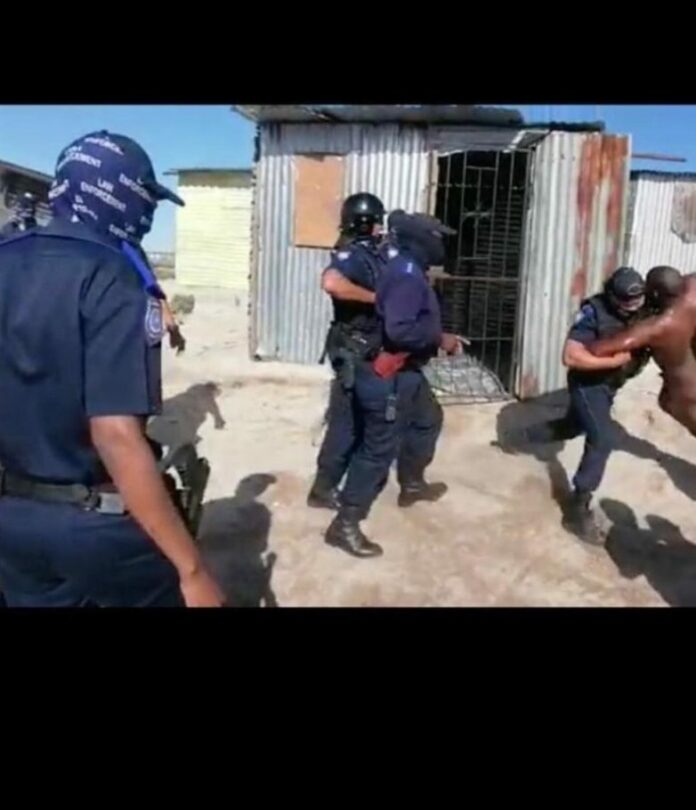 The City of Cape Town has suspended four officers with immediate effect for dragging Bulelani Qholani out of his home naked.

In a video that was widely shared on social medial yesterday, Qholani was seen being dragged out of his shack by the City’s law enforcement officers during an illegal eviction operation.

In a statement today, executive mayor Alderman Dan Plato has strongly condemned the actions of the officers, saying the City will not tolerate such conduct.

“While the investigation into the conduct by law the  enforcement officers and the circumstances around the situation is ongoing, as the mayor of this City, I want to acknowledge that Mr Qholani’s dignity was impaired and I’m truly sorry for what he had experienced “.

” It is also important to address the misinformation that is shared so easily on social media. While evictions are not permitted under the lockdown, the courts as well the national minister of human settlements Lindiwe Sisulu have made it clear that municipalities across South Africa have the duty to prevent illegal land invasions, ” he said.

Dan Plato also said that the particular area in Khayelitsha was invaded during the first weeks of the lockdown and the city has responded to requests from local community to remove the illegally erected structures.

He said the City-owned land was earmarked for the installations of services for the surrounding community.

“A local NGO and legal support structure took the city to court to prevent the removal of the setup of the illegal structure during a land invasion. The Judge ruled that while the City had not been in any breach of regulations due to the Covid-19 pandemic, he would allow the 49 structures that had already been erected to remain there temporarily during the lockdown”.

He further said that the offices had the duty to conduct themselves with the profession and respect the residents.

It has also been reported that the SA Human Rights Commission (SAHRC) intends taking the City of Cape Town to court over their eviction policy and the manner in which the victim was removed from his home.

“There is absolutely no excuse for what happened,” said SAHRC commissioner Chris Nissen on Thursday.

The commission also believes evicting people during the COVID-19 pandemic is a breach of the Disaster Management Act.

“And we, as the commission, have decided that we will go to court and stop the City from evicting people during Covid-19.”