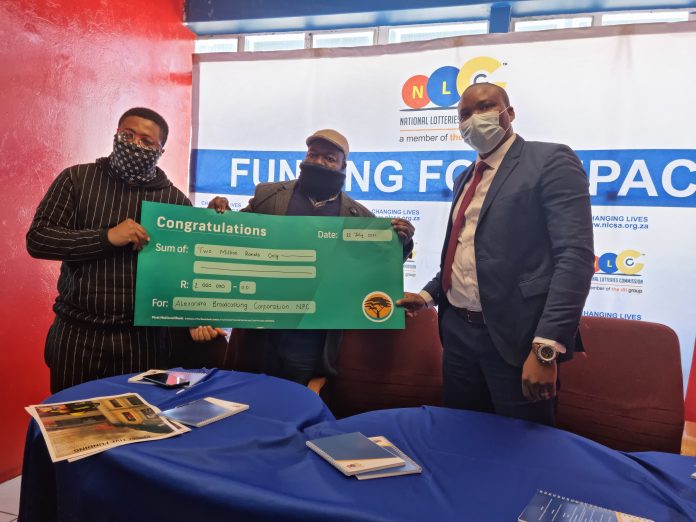 Johannesburg – The National Lotteries Commission (NLC) has provided funding to the community radio station, Alex FM, after the station was vandalised and millions worth of equipment looted.

Alex FM station manager Takalani Nemangowe said the studios were destroyed and state-of-the-art equipment was stolen. Nemangowe estimated the damage to be around R5 million.

The radio station temporarily moved its operations to Sandton while pledges for donations to help rebuild it has been rolling in.

“The NLC has handed over aid to Alex FM in an effort to assist one of Gauteng’s oldest community radio stations to get back on track,” the NLC said in a statement.

Alex FM, which has been described as the pulse of the sprawling township, was not left untouched when civil unrest broke out in Gauteng in early July, and the Pan African Mall was damaged and looted.

The loss of broadcasting equipment, computers and other assets saw Alex FM silenced for a period. They are currently broadcasting from an alternative venue.

The NLC said in a statement, “The NLC’s proactive funding of R 2 million is intended purchase equipment to fast track their efforts toward full operation and providing information, education and entertainment programming to the people of Alexandra and beyond. Established by the Alexandra Community Trust in 1994, the station serves a critical role in entrenching the diversity of cultures in community-building initiatives and is a key portal of providing accessibility of services to the community.”

BREAKING: Our studios have been destroyed and state of the art equipment worth millions of Rand stolen 💔. We are currently off air #AlexFM pic.twitter.com/GfPDftjwga