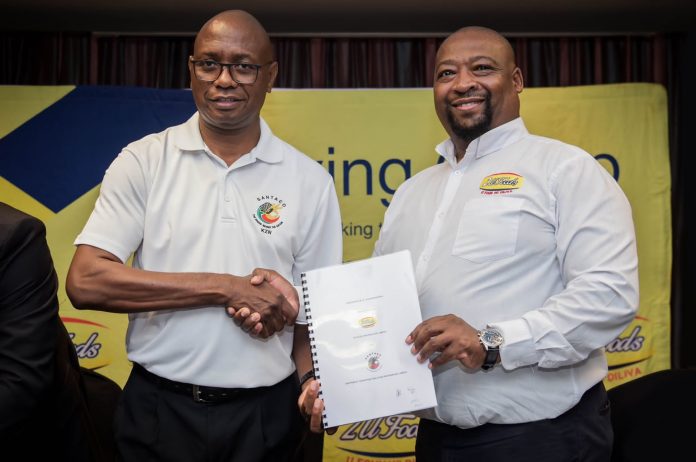 Johannesburg – Businessman Kholofelo Maponya and his business partner Inkosi Sipho Mahlangu are on a crusade to disrupt white-owned retailers who have targeted townships and rural areas for expansion.

Maponya’s company 2U Foods has embarked on roadshows across the country rolling out its retail container concept.

2U Foods and the South African National Taxi Council (Santaco) in KwaZulu-Natal, on Thursday, signed a memorandum of understanding that seeks to exploit the influence of the two organisations in their sectors to encourage black ownership of the retail value chain. Maponya said the partnership would also create 4960 direct permanent jobs in the province.

“Through a comprehensive supplier development programme and preferential procurement policy, subsistence farmers will be integrated into the group as suppliers providing them with access to market through the 2UFoods’s national footprint of 1 200 stores within the next 12 months.

This will directly impact black farmers who have been ostracised by larger retail groups and afford them the opportunity to farm for the purpose of business instead of farming for survival,” he said.

Maponya, who is the nephew of celebrated late business guru Richard Maponya, is no stranger to undertaking ambitious projects.

He is the chairperson of MMI Group, director of SA Homeloans and Afgri. He said they had big plans for 2U Foods.

“We are very happy with signing up other partners too. We will open 1 200 stores before the end of 2022 and look at 500 per year from then onward to reach our target of 5 000 stores including liquor, hardware, and other products,” a bullish Maponya said.

The stores with a cost of just over an R1-million also come with stock valued at R150 000 (once-off), security alarm system, wireless router, cash drawer, point of sale till, and a delivery scooter.

Listed retailers have in recent years been aggressively tapping into the flourishing township economy.

Mr. Price recently launched a new container store model, joining the likes of Pick n Pay, which launched a new franchise model where it partners with local spaza owners and Shoprite’s USave ekasi container shops, which were launched in townships four years ago.

It is estimated that the spaza shop market in South Africa is worth about R40-billion a year and that 90% or more of the transactions are in cash. South Africa’s informal market is characterised by unbanked spaza owners with limited or no access to better financial products.

Santaco KZN spokesperson Sfiso Shangase said for now the initiative was only catering for those in KwaZulu-Natal but that there was a plan to expand it to more provinces.

“All 16 regions in KZN will benefit from this esteemed partnership, the person who qualifies is the minibus taxi operator who is eligible on the requirements stipulated for this, in terms of the credit score but if we come to a region that has a juristic person will then qualify for this project.

“This partnership comes at the time we realised that we as blacks we don’t own supermarkets, this gives the taxi operators also time to find their hand in the supermarkets so they have other investments despite taxi industry,” he said.

Watch a video of one of the retail container concepts below: