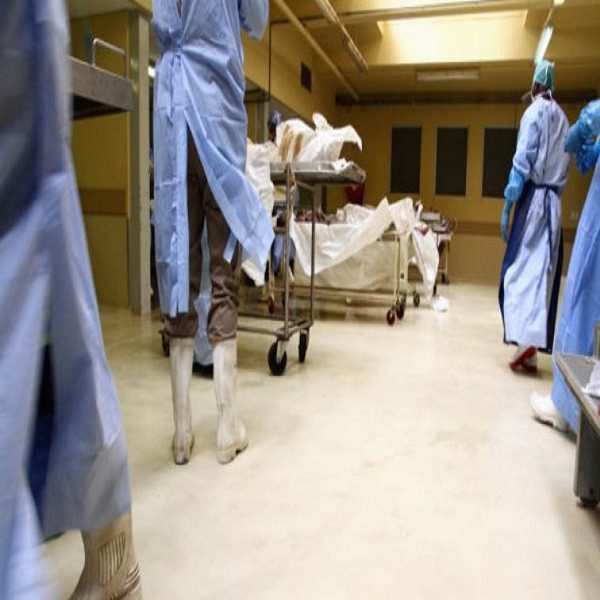 As the country wrestles the novel Coronavirus, funeral undertakers say they are battling to deal with increasing volumes of those giving in to the virus. This winter was the deadliest.

Manager of Soweto-based KV Funerals Bafana Sihlalo said there has been a surge in the number of people they have had to bury since mid-May. “June and July were our
busiest months, an average of 34 funerals a week that we had to conduct. To say we were overwhelmed is an understatement,” Sihlali said.

The funeral parlours said at times they were overwhelmed by the number of people they had to bury daily. Importantly, they had to guard against their own employees and bereaved family members getting infected during the identification and viewing of the body of their loved one.

“We are now seeing a slow decrease in the numbers. Since the beginning of August, our numbers have been going down, the average is now 10 to 15 a week,” he explained. Vusana Funeral Service communications manager Nokuthula Shongwe said those who work with death daily must be more careful. She said since May, they have been three times as busy, but there is light at the end of the tunnel as the numbers are now going down.

“What has been heartbreaking is that bereaved relatives, in some cases, cannot attend the funerals of loved ones, many of whom have died from Coronavirus,” Shongwe said.
“We’ve been burying people everyday … I cannot give you the exact stats … but there has been a surge in numbers. We treat all funerals the same because some people can be infected and are not diagnosed as having died as a result of the pandemic.

“It is crucial to work in conjunction with the Department of Health from the time the body is released at the hospital to the day of burial. The use of PPE [personal protective equipment] all the time is crucial, otherwise we can be fined.”

Dangerous occupation Shongwe expressed concern about the safety of her employees as they move bodies from homes and hospitals, coming into contact with victims of the pandemic that has swept the globe. God’s Grace Funerals’ corpse dresser Sipho Ncube highlighted the dangers faced by frontline workers at funeral parlours and undertakers.

Muzi Hlengwa, president of the National Funeral Practitioners of South Africa, said: “Over the months since the outbreak of the virus, South Africans have become familiar with enduring the strict measures for funerals under COVID-19 pandemic and the national lockdown restricting funeral attendance to 50 people.”

Hlengwa said there were a number of severe restrictions that have seen common customs adjusted in Coronavirus cases. “All bodies that we collect should be treated as if they are infected with the Coronavirus. That is the only way we can be safe as undertakers.”

Hidden victims K2M Funeral Services manager Fanyana Khumalo said winter was normally the busy period for the Tembisa-based mortuary with about eight burials a week, but this year has seen a massive increase. He said that 40% of the deaths were related to COVID-19 while others could not be confirmed as they had died without testing for the virus.

“I understand that COVID-19 has been in the country for quite some time and reached a peak during the winter season when mortuaries are most busy, but what the mortuary has seen in the last three weeks has been shocking, it can never be compared to our last 18 years,” Khumalo said.

“I have never had to collect seven bodies from homes in a day, never had a family delivering a corpse to the mortuary by themselves and I have never, ever in history had to bury 20 people on the same weekend.”

Nico Richter, Martin’s Funerals manager for Soweto and Roodepoort, said the number of deaths increased significantly under level 3 of the lockdown. “Unfortunately, I cannot confirm the number of COVID-19 deaths we have received. “We handled most home deaths as suspected COVID-19 [cases] for safety, but the actual confirmed cases were few because, as I said, if you weren’t tested before you passed away, the death would not be counted as COVID-19,” said Richter.

He said the township recorded more deaths than their franchise in Roodepoort did. “In Roodepoort, we also saw an increase, but by only about 40%. Very few confirmed COVID-19 cases. We would collect multiple deceased persons from a single old-age home in a week, all registered as pneumonia, because they were never tested.”

The National Union of Metalworkers of South Africa said in an open letter to President Cyril Ramaphosa the sudden reduction in the number of deaths was suspicious.

“We have found no credible scientific explanation why government statistics on the Coronavirus rate of infection and deaths in South Africa show a sudden drastic reduction. “We are also not convinced the deaths announced by the government so far are anywhere near the truth,” explained the trade union.