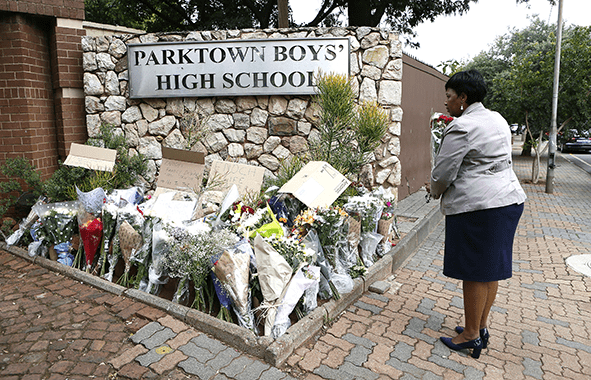 The Institute of Directors in South Africa (IoDSA) this week said the tragic drowning of Parktown Boys’ High pupil Enoch Mpianza, who died while at a school orientation camp in Brits, North West, is a wakeup call for school governing bodies to get their act together.
Muhammad Seedat, chairman of the IoDSA, said school governing bodies are analogous to a company’s board of directors, and they have the responsibility
of ensuring everything is in place for the institution’s longterm sustainability.
“The governing body bears the ultimate responsibility for ensuring that the school not only understands the risks that it faces, but also how to mitigate them. For example, has it put a risk register in place along with policies to mitigate the identified risks?” Seedat asks.
“King IV recognises that risk and opportunity are o¡ en two sides of the same coin. In this case, the opportunity is to ensure that this kind of disaster does not happen.”
Parktown Boys’ management was left at sixes and sevens after 13-year-old Mpianza died during a Grade 8 trip.
A preliminary investigation found that the Joburg school failed to get approval from the district before embarking on the trip. The school’s principal, Malcolm Williams, has since been suspended in the wake of the saga.
One of the defences advanced by the school was that the Mpianza family had signed indemnity forms and hence liability did not lie with the school – a defence
that sparked further outrage.
Gauteng premier David Makhura, in his state of the province address, said the defence of an indemnity form was unacceptable and that his administration
was in the process of changing rules to ensure schools don’t escape responsibility on technicalities.
“We are taking urgent steps to strengthen school safety, working together with school governing bodies and law enforcement agencies. These include reviewing
rules governing school trips, conducting regular searches to remove dangerous weapons and tackling the scourge of drugs,” Makhura said.
Gauteng MEC for education Panyaza Lesufi is yet to make public a forensic investigation report on the death of Mpianza.
By Kabelo Khumalo