Local music artist DJ Tira had a morning of laughter as he woke up to the bitter news that his son Tank The Rockstar was in a love heartbreak.

Social media went up in flames after DJ Tira’s son, real name Chase Khathi, revealed on Instagram and Twitter that he was cuckolded by the former Bafana Bafana goalkeeper Itumeleng Khune.

The muso recorded a short clip making fun of his son’s devastation by singing Whitney Huston’s Where Do Broken Hearts Go.

On Friday, Chase exposed his 18-year-old girlfriend for allegedly cheating on him with the Amakhosi keeper.

“I don’t have anyone’s shoulder to cry on anymore,” he wrote on the posts.

In a video clip which he captioned: “Loyalty over royalty I’maa die for respect, I gave you my all and this is how you repay me ?? @ttshego_m Toast to the truest moments we shared I really loved you.”

The 18-year-old at the centre of the storm clapped back on Instagram saying she could not believe how “unnecessary” he was over an innocent video. 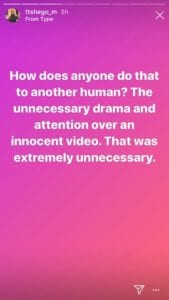 Chase and DJ Tira’s did not not respond to text and phone calls made by Sunday World at the time of publication.