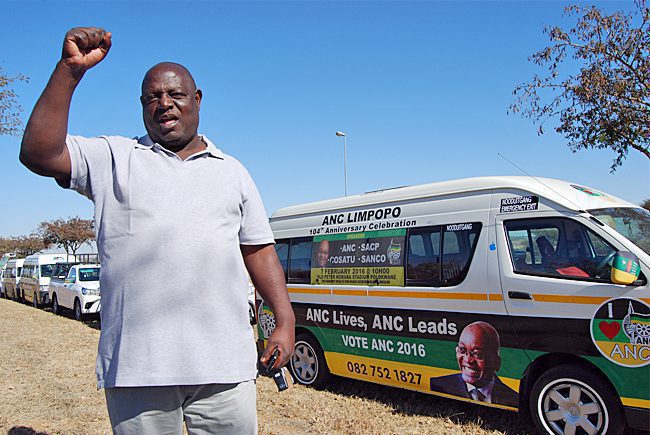 Kwasa king and well-known Limpopo ANC member Steve “Malo-A-Botsheba” Sefofa has called on the ANC structures and alliance partners in the province to respect the NEC’s decision to reinstate party leaders who were forced to step aside after being implicated in the VBS corruption.

Sefofa, who drives around in a phalanx of vehicles branded in ANC colours, said COSATU, SACP and MKVA should embrace the NEC’s decision to reinstate ANC Deputy Provincial Chairperson Florence Radzilani and Provincial Treasurer Danny Msiza to their positions.

“For the sake of unity and peace in our province, I want to plead with them to respect the NEC’s decision, this will strengthen the working relationship between our organisation and our alliance partners. It is not helpful to continue to pull in different directions after the NEC, which is the highest decision making body in the organisation, has taken a decision,” he said.

Sefofa decided to voice his views after reports that COSATU, SACP and MKVA have refused to meet with NEC officials who wanted to officially communicate the rational behind its decision to reinstate the duo.

“The two leaders have not been charged by the Hawks for their alleged involvement in the looting and the subsequent demise of VBS. Those who were found to have stolen money were arrested and are now facing the music. When you say comrade Msiza and comrade Radzilani must clear their names before they could be returned to their positions, where must they go and clear their names? Must they just march to our courts or police stations and demand to be arrested or prosecuted? The law doesn’t work like (that), we don’t live in a banana republic. We sympathise with those who lost money in the VBS and thieves must be prosecuted and those who have no case to answer must not be politically persecuted,” he said.

Sunday World learnt that the NEC’s final consultation process includes meeting the minority shareholders of the bank before giving the two thumbs up to return to their respective positions.