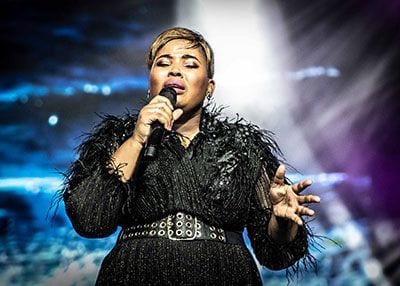 Gospel superstar Lebo Sekgobela and her husband Lucky have been served with a letter of demand to pay R 750 000 for allegedly breaching their contract with publicity company Rashiky Media for her tour.

The company has also threatened to interdict The Lion of Judah hitmaker’s tour.

Once the venues had been secured within Tsogo Sun, the Umusa singer would perform at the venues on dates agreed to by the company (Tsogo Sun) and her.

Rashiky was entitled to 30% of the proceeds of sales upon securing venues at no venue hire cost.

But the Sekgobelas breached the contract when they directly contacted Tsogo Sun despite the agreement specifically stating Rashiky Media would be the point of contact.

Rashiky threatened to take action against the Sekgobelas if they did not reinstate their agreement.

Abdullah asked his lawyers to write to them after they sent him from pillar to post when he demanded they reinstate the contract and compensate him for his services.

“Should you fail to reinstate the agreement between the parties as aforesaid, our client will exercise its legal rights in one of the following manners: Sue for damages suffered by our client in the amount of R 750 000.00, interdict the Lebo Sekgobela Tour and/or Sekhorane Entertainment and/or Lebo Sekgobela from performing at the Tsogo Sun venues in terms of the agreement; [and] that all Lebo Sekgobela tours be cancelled forthwith and/or interdicted, pending the finalisation of the legal dispute between the parties,” reads the document.

Speaking to Sunday World, Abdullah said he was disappointed and believed that this was “unChristian” behaviour.

“I am personally disappointed and highly offended that my concepts have been used without me and they are proceeding with certain elements of my concepts. Sadly in my emotional capacity I feel it is unprofessional, unscrupulous and very unChristian- like to take the hard work of a person who is less fortunate than them. I have asked them to refrain from using my concepts and now I have no choice but to take legal action,” said Abdullah.

Lucky confirmed to Sunday World that they did business with Abdullah but denied that the media company had assisted to secure the Tsogo Sun sponsorship.

“He never assisted us but he w as with us. We s at and discussed the plan not to say, ‘Rashaad this is what we want from you’.

“We did not hide the plan, he knew the plan.

“We then asked him to train our PR lady to at least meet with Tsogo Sun, we agreed on that level,” said Lucky.

He added that Abdullah had drafted the letter to the hospitality group with the in-house public relations personnel.

He also explained that he was not aware that Abdullah had been running around trying to secure the deal for Sekgobela.

“I only realised that when he started asking for money,” said Lucky.

Tsogo Sun declined to comment, saying the matter was between the Sekgobelas and Rashiky Media.