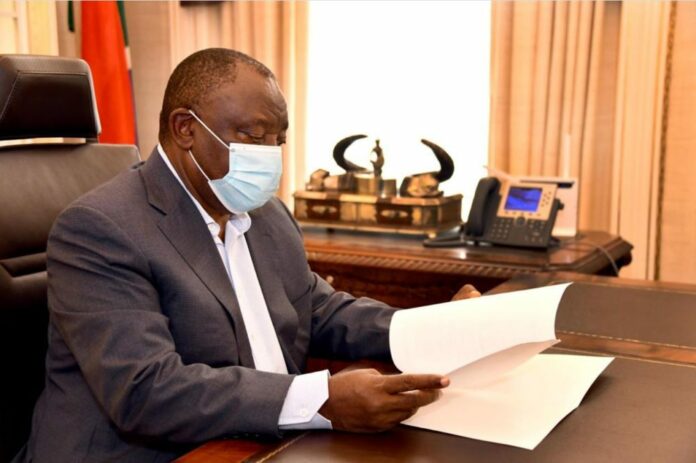 Johannesburg – President Cyril Ramaphosa in his weekly letter to the nation ignored the burning issue of tourism minister Lindiwe Sisulu’s alleged attack on the judiciary which drew scorn from the country’s top judge last week.

Sisulu who headlined news last week wrote an opinion article where she launched a blistering attack on the country’s judiciary, and called out judges whom she referred to as “house negros”.

Following her sentiments, the acting chief justice Raymond Zondo came with guns blazing to reprimand Sisulu and condemned her attacks on the work of the judiciary.

In his response last Wednesday, Zondo then said: “We as Judiciary we have never said we shouldn’t be criticised, but Ms. Lindiwe Sisulu has imposed an insult to the work of Judiciary.”

Civil society has also been calling for Sisulu’s sacking.

Sunday World reported on Sunday that with her attack on the judiciary and the country’s constitution, Sisulu “is daring the president to fire her”, according to ANC insiders close to both ANC factions.

Also read: Sisulu takes page out of Zuma’s playbook as she takes on Cyril

However, sources close to President Cyril Ramaphosa said he is not going to dismiss her for fear of tearing the party asunder and will instead wait for her to simmer “until she can no longer handle it”.

However, Ramaphosa instead gave focus to two aspects: the fire that engulfed Parliament and the release of the first batch of Zondo commission report.

While touching on the findings of the Zondo report, Ramaphosa said the constitution must be safeguarded against anyone who wants to weaken democracy.

“We need to protect our Constitution, our democratic state and the electoral process from anyone who wants to weaken our democracy and deny the South African people of their hard-won freedom,” said Ramaphosa.

He added that Zondo’s report detailed how several public institutions such as South African Airways, the Government Communication and Information System and the South African Revenue Service were infiltrated, looted, and severely damaged.

“This part of the report paints a deeply disturbing picture of how key institutions of our democracy were compromised and undermined with criminal intent.

Not only were significant amounts of money stolen, but these institutions were not able to properly fulfill the functions for which they were established,” states Ramaphosa.