SA’s boozy nation braves the queues as alcohol is unleashed 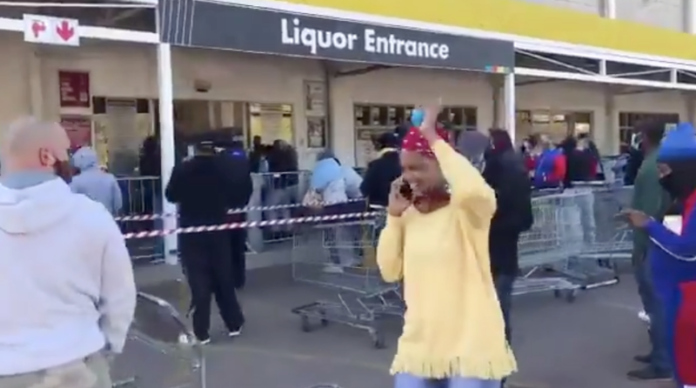 It was a day of celebration in Mzansi as alcohol was unlocked during this lockdown, which is now at level 3.

Under Level 3 regulations, which kicked off today, any venue with a licence can sell alcohol but only from Monday to Thursday between 9am and 5pm.

This after alcohol sales were initially banned at the end of March when President Cyril Ramaphosa announced the country would go into lockdown, level 5, to curb the spread of the coronavirus.

Many were still upset that they couldn’t buy smokes, claiming that the two go together like a glove in hand.

Makro’s queues were by far the longest compared to other liquor outlets around the country. A viral video shows consumers singing in unison as they await the doors opening.

Mary Bandile says she was taking her daughter to the doctor, and at 7pm in Parktown, Solly Kramer’s already had a queue of people going right down 7th Avenue.

“People couldn’t wait. Braving the cold for booze,” she said.

George Davids said he was making a quick trip to the pharmacy in his area on the West Rand and went to Tops, which is in the same shopping centre.

“I thought because it was already after 12 (midday), I’d beat the lines, but I see everyone had the same idea,” he said, all masked up and his own sanitiser in hand.

Davids had a total of twenty patrons ahead of him waiting to be served.

Pretty Keebine, said she was coming for her wine stock as well as Savannah ciders.

“I hope I get a fresh batch and not old alcohol,” she said. She was, however, impressed with people adhering to the social distancing protocols.

In Sky City, East of Joburg, queues for people headed toward a local Shoprite Liquor outlet still had hundreds of people in the queue by 4pm, an hour before the outlet was supposed to close.

Meanwhile, many South Africans who hate long queues have gone the online route to secure their drinks of choice.

It was reported by OneDayOnly.co.za that sales of alcohol and wine had increased by almost 500%.

But Online Wine portal Get announced on their social media that they had to pause sales due to an influx of orders during level 4. They needed time to work through the backlog before taking more orders this week.