Roberts, who has years of writing experience as a journalist, mirrors her life experiences through the fictional character, Zinhle. The flamboyant former Real Goboza presenter is known to have a raw take on how a story should be told.

Speaking to Sunday World this week, she said the fictional book looks into the life of a young light-skinned girl who is trying to find fame in
Johannesburg. But she becomes embroiled in a life of sex, drugs, rape, deceit and abuse.

“Some of the [experiences] are clever, but most of them are vile,” she said.

The novel took under a year to complete and was released on Friday.

An extract from the book reads: “Soon they were engaged in a bout of frantic f****, Clifton moaning as he’d never moaned before, and when
Zinhle reached orgasm her entire body trembled, having long been deprived of such pleasures.”

Zinhle’s life is nothing short of a tabloid scandal.

Abandoned by her father, she is raised by her single mother, Mabel in Dobsonville, Soweto.

Growing up, she always knew she would be a superstar, and landing starring roles in leading telenovelas has become the norm for her. Her journey to stardom is filled with both pain and pleasure; she lives through a sham marriage, being the a lover of a Nollywood high roller,
attending sex parties and having an affair with a footballer.

Roberts says she did not find it difficult to pen down the character’s life story because she  was writing about an industry he is familiar with. 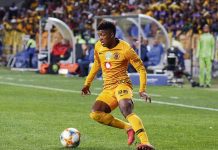