‘Somhale’ ties the knot in style 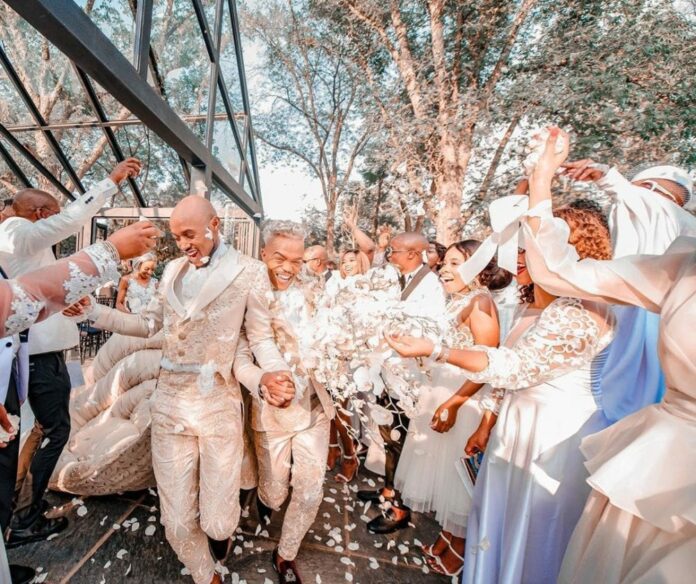 Guests’ cellphones confiscated and media barred from covering the event
The heavens opened with showers of blessings as Somizi Mhlongo and Mohale Motaung walked down the aisle on Thursday night.
The rain was no damper for the A-list couple, whose wedding saw hundreds of local media personalities dressed in white at the Inimitable wedding venue in Muldersdrift.
The white wedding follows their traditional wedding in Kibler Park, Johannesburg, last September.
According to the exclusive invite, the couple had requested all guests to wear white with red bottom shoes and parade as though this was their own wedding.

#SomhaleUnion @showmaxonline exclusively- That’s the only place you will witness the wedding This is the final piece of the puzzle… the final celebration of our union…it’s been an amazing journey, so many events, so many friends, so much family and so much love. Thank you all for joining in via our social media. I’m very happy to announce that in weeks to come, you’ll get to see the 4part special of #SomhaleUnion exclusively on @showmaxonline from 24 February … ???? @nungudiamonds u outdid yourselves ???? @aust_malema

“White is the colour of perfection, purity and a symbol of wholeness and completion and for our wedding, we ask that you honour the colour and all it represents,” read the invite.
The pair broke the internet once again, with the likes of Pearl Thusi, DJ Zinhle, Minister of Social Development Lindiwe Zulu, Minister of Transport Fikile “Mr Razzmatazz” Mbalula and tenderpreneur Shauwn Mpisane all making the guest list.
It is important to note that one person who went against the grain was Somizi’s friend, Cassper Nyovest, who arrived late in a grey suit. The newlyweds had three extravagant outfit changes with their signature Christian Louboutin red bottom shoes and attire designed by Gert Johan Coetzee.

My dreams came true last night. What a pleasant surprise. This man was supposed to be performing overseas and he decided to surprise me at the end of the evening and played at our wedding.i cried like a baby with excitement. @realblackcoffee I'll forever cherish this moment. And to all performers we thank u. @shimza.dj @djzinhle @casspernyovest @manilavonteez #somhalewhitewedding

They sealed their love with engraved “Somizi” and “Mohale” Nungu Diamond gold rings.
The event was tightly secured – there were three registration areas for guests to check in before entering the ceremony, and phones were confiscated.
The ceremony was all decked out with the Idols judge personalised G.H Mumm champagne, luxurious meals including salmon, caviar and oysters.

He said “I Do”. #somhalewhitewedding

Black Coffee and Shimza performed at the wedding.
Content creator Donald Nkomo was among the few guests with the inside scoop of what happened at the wedding of the year.
“I literally just left the venue quickly to check on my phone. Because, wow, phone anxiety. This is probably the best event and experience. I mean everything that I’ve ever imagined in my life,” said Nkomo.
Somhale, as they are popularly known, also announced this week that they would exclusively showcase a four-part wedding special on Showmax Online, providing a front-row seat to one of the most historic, heartfelt and fabulous weddings in South African celebrity history.
It is directed by Barleader Reality.
Showmax’s Candice Fangueiro, head of content, said following the success of previous celebrity weddings such as Becoming Mrs Jones and Dineo and Solo’s Wedding on Showmax, they knew their audience would love this special.
“Somhale’s wedding is a beautiful and unique love story that needs to be told,” said Fangueiro.
By Nokuthula Zwane

USA billionaires record a surge in wealth during COVID-19, including newcomer...