Supporters warn of chaos if Zuma is sent back to prison 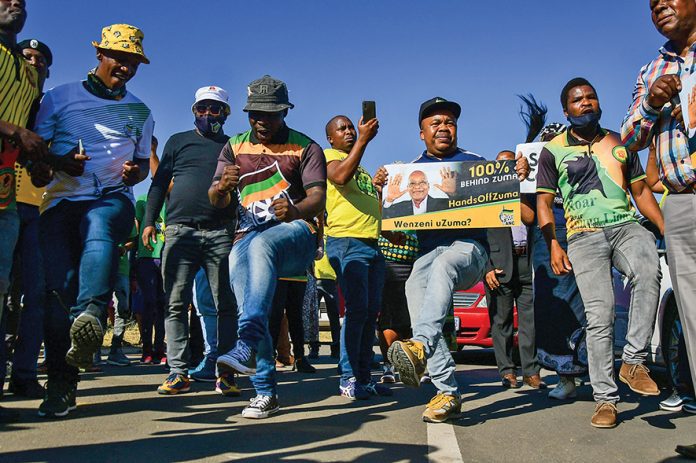 Another security threat is brewing in KwaZulu-Natal leading up to former statesman Jacob Zuma’s court appearance in August, when the Supreme Court of Appeal is expected to hear an appeal against his early release from prison.

Last year, Zuma was reduced to a convict when Judge Sisi Khampepe of the Constitutional Court found him guilty of contempt of court for his failure to appear before the Zondo Commission of Inquiry into State Capture.

She ordered that the former president should serve 15 months’ imprisonment.

On July 7, Zuma turned himself in at the Escourt correctional facility to begin his sentence. He spent close to two months in the facility before his long-time confidant and then national commissioner of correctional services Arthur Fraser released him on medical parole. The DA and AfriForum protested against the decision.

But Judge Elias Matojane of the Gauteng High Court ruled that Fraser had erred in his decision to give Zuma early parole, effectively saying he should be sent back to prison to complete his sentence.

Now his sympathisers are regrouping, vowing that the former president will never see prison again. The taxi industry, amabutho and ANC regions sympathetic to Zuma’s legal woes are at the centre of the plan.

Nkosentsha Shezi, a core Zuma ally and spokesperson of the Radical Economic Transformation (RET) grouping in the governing party said this time they would not be bypassed.

“I can assure you that ubab’ Msholozi will not go to jail again. He is an elderly statesman who should be left alone to rest and enjoy his last years with his family. Ordinary people on the ground are sympathetic to his unlawful persecution by his comrades using state organs. Our hope is that the courts will not tear this country apart,” said Shezi.

The grouping led by key RET figures used the solidarity prayer in KwaDaKwadunuse, Nkandla, Zuma’s ancestral home to launch their campaign on Thursday.

The prayer was also used to bash senior leaders of the ANC in KwaZulu-Natal believed to be backing President Cyril Ramaphosa’s second term ambitions.

Premier Sihle Zikalala did not escape the wrath of the more than 500-strong crowd who chanted “akabuyi”, meaning he’s not coming back.

Zikalala, who is touted as the man to deliver Ramaphosa’s second term, is seeking re-election as ANC provincial chair in next month’s elective conference.

The cold reception he received from the crowd saw him being whisked away to safety by his bodyguards.

Mfana Mwandla, another staunch Zuma supporter and organiser of various taxi associations, said a plan has been set in motion to mobilise the public to protect and defend Zuma from being incarcerated. “We will not fold our hands and let Msholozi suffer alone.

The taxi industry has suffered heavily under the current establishment with petrol prices reaching unreasonable levels. We will use Zuma’s support to show our frustration.

“Should he be returned to prison, nothing in this country will move,” threatened Mwandla.

In the aftermath of Zuma’s incarceration, there was mayhem in the country leading to death and culminating in the looting of shops.

More than 350 people died, with KZN and Gauteng bearing the brunt of the protests.

Sunday World has established that high food prices, fuel and the rising public transport costs will be used to agitate communities to join national protests and render the country ungovernable.

This week, the Pietermaritzburg Economic Justice and Dignity Group, a nonprofit organisation, also warned of food riots in the province, saying the climate was ripe for protests.

Meanwhile, the Department of Correctional Services said it will defend its decision to release Zuma, saying he met all conditions to be released on medical parole, citing that he was terminally ill and that he was also a low-risk inmate.

“We’re monitoring the developments, including what is likely to happen after the outcome of the case.

I can’t divulge much intelligence collection on that,” he said.

Meanwhile, Ramaphosa on Thursday met representatives of political parties in an attempt to address concerns raised by “political leaders on the security situation in the country and economic difficulties affecting citizens”.

“Leaders of political parties represented in parliament had requested an interaction with the president to discuss security in the country in general; the security apparatus; findings of recent inquiries into components of the security apparatus, as well as the unrest that affected KwaZulu-Natal and Gauteng in July 2021; crime and lawlessness in communities, including kidnappings; rising tensions between South Africans and
foreigners; and cross-border crime,” Vincent Magwenya, spokesperson for the president, said.