Trouble in paradise for Zuma, wife 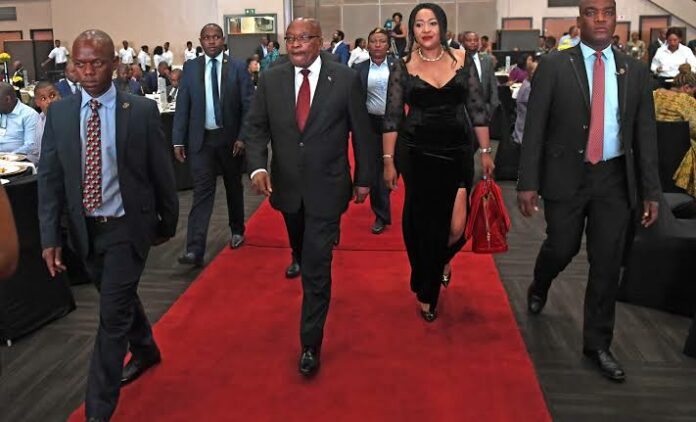 Missing sim cards cause of conflict
Former president Jacob Zuma allegedly barred one of his wives, Thobeka Madiba, from his Nkandla compound about three weeks ago after accusing her of taking his sim cards without his permission.
Two sources, who did not want to be named for fear of reprisals, said Zuma chased Madiba out of the compound after an argument over the disappearance of the sim cards.
A deep throat, who is close to the family, said Zuma discovered that his sim cards, which apparently stored confidential information and cellphone numbers that were only known to
close friends, family and associates, went missing from the compound recently.
It is alleged that the sim cards were suddenly found after Madiba’s return to the compound.
“All I know is that there was some kind of confrontation and thereafter she was shown the door. The thing about family meetings is that sometimes there is no fairness. I feel she was wronged,” said the source, indicating he is unclear how many sim cards the former president keeps.
However, a second source said Madiba was the victim of isithembu gone wrong – with too many things starting to go awry after Zuma left once.
“Look, there’s a guy who runs uBaba’s private affairs who is very toxic. He is the source of the initial claims that MaNtuli poisoned uBaba. We now know, so many years later, that there is no evidence to link her to the poisoning – if there was any poisoning at all,” said the source.
Sunday World established that Zuma is currently out of the country. He is on another trip to Cuba, where he has been receiving medical help.
Said the source: “Zuma’s secretary wanted to trick Madiba into confessing that she took the sim cards – a move that would have seen her thrown out of the family home. The family takes betrayal very seriously.
Had she fell for the trick, it would have rendered her persona non grata. Now there is some confusion which we hope uBaba will clear when he returns from Cuba,”
said the source.
Phone calls to Madiba went unanswered.
Zuma’s spokesman Vukile Mathabela declined to comment, saying he could not comment on the president’s private life. “We will check if there is a family member appointed to
speak on the matter and revert to you,” said Mathabela.
He had not done so at the time of going to print.
By Ngwako Malatji