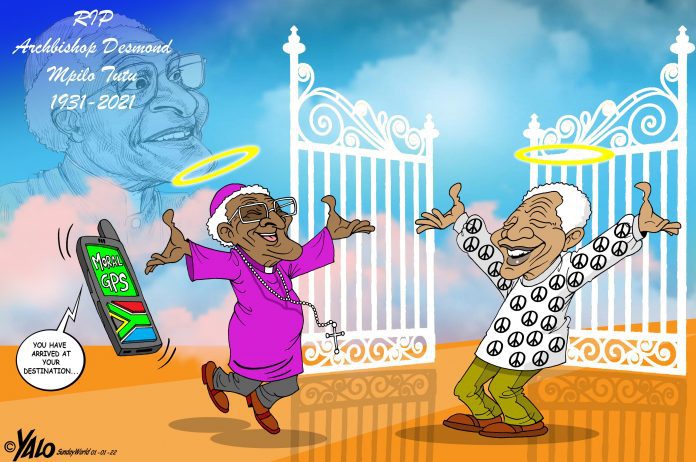 Johannesburg- This week, we at this newspaper had to cut our holidays short to return to our office to produce this special edition in honour of the fallen giant of social justice: Archbishop Emeritus Desmond Mpilo Tutu.

This is not only dedication and honour to the Arch but also a celebration of a colossus: an outstanding spiritual leader of rare qualities, which are hard to come by anywhere in the world.

There is no other man in past and present South African history who kept us sane during some of the most difficult and turbulent times of our lives.

Here is a man who managed to rein in our tempers during times when we were about to explode in blind and violent rage because of the pain that visited us.

Archbishop Tutu kept us sane enough to realise “that non-violence is the answer to the crucial political and moral question of our time – the need for man to overcome oppression and violence without resorting to violence and oppression” as eloquently expounded by that great American civil rights leader Dr Martin Luther King Jr.

He inspired and gave us hope when this land was in deep pain, when apartheid oppression was mercilessly scorching his people and when apartheid’s madness and mayhem were the order of the day.

Here is a man whose entire life was marked by waging majestic fights against apartheid oppressors, and liberators too, whenever he saw the rights of his people being trampled on.

With a fine and audacious balance of humility and nobility, Tutu was a man who would never hide his anger whenever he saw apartheid tendencies creeping into what is predicted to be a democratic arrangement, free of injustices reminiscent of the past brutal order.

Being a champion of social justice, Archbishop Tutu knew how cynical in the extreme it could be to speak about handouts to the poor when some few selected people could become very rich at the stroke of a pen.

His denunciation of this state of affairs was in essence opening Dr King’s sentiments that it was possible for people everywhere in the world to “have three meals a day for their bodies, education and culture for their minds, and dignity, equality and freedom for their spirits”.

A selfless man who always acted out of duty and duty alone, Tutu never acted out of expediency for he knew that a good act must never be done to “please somebody and or to gain an advantage or to secure a reward”, as such conduct ceases to constitute a good act.

In the wake of his departure, we must truly count our blessings. We have regained a sense of dignity as a nation.

Apart from the constant flow of tears as we reflect on this giant of a man, we must also constantly remind ourselves that Tutu’s legacy is worth celebrating.

Thank you, thank you, to our nation’s spiritual father. Yes, we’ll remain forever grateful for this rare privilege and honour of having come across you in our lifetime.

It is truly an honour that can only be granted to a few to have had such a colossal giant in our midst.