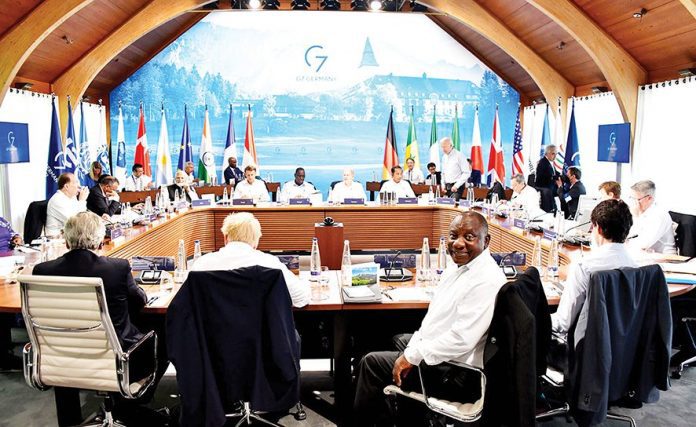 The 48th G7 summit took place in Germany from June 26 to 28. The G7 is an informal grouping of seven of the world’s advanced economies – Canada, France, Germany, Italy, Japan, the UK and the US – as well as the EU, which is a supranational state. The leaders of Argentina, India, Indonesia, Senegal, South Africa and Ukraine were invited as guests to the meeting.

The focus of the meeting was primarily on punishing Russia for its use of military force in Ukraine. It took place against the backdrop of an increasingly challenging environment where countries face soaring food and energy prices. Geopolitical conflict is at play and manifests in energy starvation across European countries.

This was unavoidable because Russia’s retaliation was always going to put pressure on Western Europe’s energy security and commitment to the incongruous imperial climate change agenda. The hypocritical nature of those who always talked about “clean” energy sources has been exposed.

The climate change agenda proved difficult for the G7 leaders. Climate change is a generally divisive subject that is central to current world problems, especially when it comes to the expectations placed on developing countries such as South Africa to switch from coal to renewables, with dire consequences. For example, the country is experiencing rolling blackouts as the struggle to change Eskom’s operating model continues.

The G7 countries, except Japan, previously took a decision to ban investments in new coal-fired power plants. However, some of these countries, including Germany, are back to using coal following the natural gas shortages and cite the Russo-Ukraine conflict as the primary reason for the about-turn.

While many observers believe this unexpected embrace of fossils is only temporary, the evidence suggests otherwise.

One commentator criticises the neoliberal global order as a programme aiming “to remove sovereignty from national governments, to implant a new ideology into mass consciousness and impose new standards of behaviour and new thoughts”.

The climate change debate is part of culture wars – the game of dominance is behind the ideas. Climate change fundamentalists have always been boisterous about renewables and reducing carbon dioxide emissions. All this time, however, they knew that fossils provided a reliable base load and stability in electricity generation.

Under the 2015 Paris Climate Agreement, about 200 countries agreed to limit global warming to 2°C, or ideally 1.5°C, above pre-industrial levels, “to avoid triggering catastrophic weather events”. Massachusetts Institute of Technology (MIT) academics Iris Crawford and Adam Schlosser pose a crucial question: When scientists say the earth has warmed by 1°C, which parts of the planet are being measured?

Now that the champions of the climate change agenda are doing what they deem essential to protect their economies, without seeing a need to notify the likes of South Africa, the hypocrisy is laid bare. Their coal usage proves developed countries use their power to do what they like.

On the other hand, the rich countries are also ramping up their drive to coerce developing countries to take weaker energy options. In addition to South Africa, the G7 statement declared that more “just energy transition partnership” agreements are being pursued with India, Vietnam, Indonesia and Senegal.

Not everybody is pleased with the rich countries’ decision to burn coal. Both the adherents of the climate change dogma and developing nations are feeling hard done by, but for different reasons. Climate change campaigners say the G7 summit is caught “between backsliding and just stalling altogether”.

As stated above, the rich countries have also been vociferous in compelling developing countries to adhere to the 2015 Paris Agreement and its provisions. Today, these poorer countries are stuck with unsustainable renewable energy programmes, unstable energy supplies and falling economies.

South Africa is already feeling the pinch and will go down in history as the most notable victim of climate science rooted in colonialism, European imperialism, and toxic capitalism.

Europe imports coal from South Africa and other developing countries,  and resource-rich territories are being forced to abandon coal as a source of energy and export it to the developed world instead. South Africa moved from excess capacity, which also benefited the neighbouring countries, to the world’s laughing stock for its blackouts.

The reinstatement of coal exposes the hypocrisy of the climate change agenda, which thrives on the back of electricity grids that provide the stable base load that renewables are not capable of. With the Russians pulling the carpet from under Europe’s feet, the huge drive to reinstate coal is understandable because wind and sunshine are not solutions.