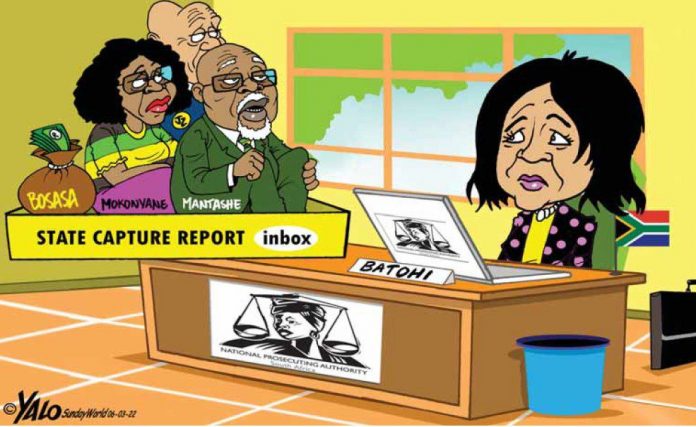 President Cyril Ramaphosa’s choice to head the National Prosecuting Authority’s Investigative Directorate (ID), advocate Andrea Johnson, has been talking tough in the wake of her appointment this week.

She succeeds Hermione Cronje who recently threw in the towel after what has been described as 30 months of frustration as head of ID, having not succeeded in bringing a single high-profile case to the court during her tenure.

Amid all the fanfare accompanying her appointment, the question we find difficult to answer is what is going to make her succeed where others like her predecessor failed so spectacularly? Johnson takes over as Judge Raymond Zondo has been hard at work, delivering damning evidence of corruption – both in the corridors of power and outside state institutions – by powerful individuals who had corrupt access to levers of power under Jacob Zuma’s administration.

It remains to be seen how Johnson is going to deal with the alleged crooks implicated in state capture, especially as they appear to be ready for the fight and daring in their actions as they spit in the face of Justice Zondo with their consistent attacks on his findings.

Johnson has her work cut out for her. Some interviews she granted to media houses this week gave us a glimpse of her professional character as a prosecutor. She sounds like a person who wants to hit the ground running.

She came across as a committed public servant who can’t wait to see political and commercial crimes punished, and crooks running for cover. She sounds confident, perhaps because she has been in the trenches of the criminal justice system for many years, having served in the highly efficient Scorpions, which was disbanded by the governing party rogues for political expediency.

The NPA itself was this week full of praise for Johnson, crediting her for leading a team of senior prosecutors and investigators that dealt with complex forensic investigations of financial crimes and her experience with the Scorpions, which the authority said was important in taking the ID forward.

It is too early to tell whether her appointment is a step in the right direction for the NPA, which has thus far been moribund in bringing serious corruption cases to court. We, however, want to give Johnson the benefit of the doubt. We expect her to inspire confidence and courage similar to the spirit displayed by prosecutors who worked for the Scorpions during the pre-Zuma period.

South Africans can’t wait to see state capture prosecutions take root following all the work that has been done by the Zondo Commission.

Millions in taxpayers’ money, which was invested in those crucial investigations by the commission, must never be allowed to go to waste because of the dismal failure to prosecute corruption cases.

We are going to hold Johnson to her words. We expect her to show the will and leadership in prosecuting corruption cases, which she has publicly said was lacking in the system. It is only then that the non-negotiable independence of the prosecuting authority she has been talking about will ring true to many South Africans.