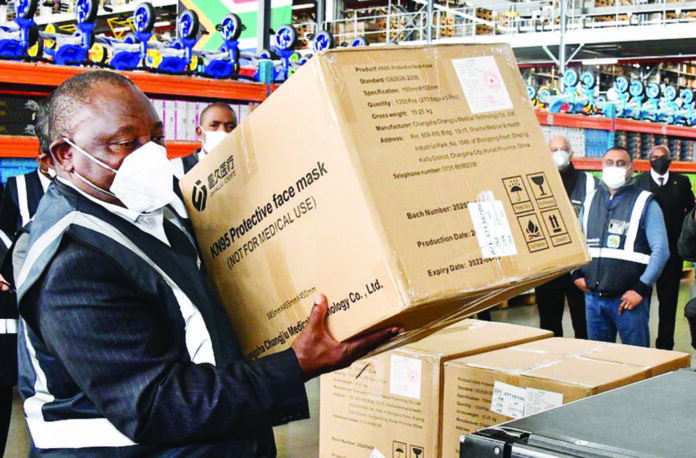 B4SA mum on who selects suppliers

A veil of secrecy has been thrown over a panel of people that awarded lily-white companies multimillion-rand lucrative contracts to supply government with medical equipment to fight the spread of COVID-19.

Business for South Africa (B4SA), which has been procuring PPEs (personal protective equipment) on behalf of government and the Solidarity Fund, has refused to reveal the names of those who were entrusted with appointing suppliers for the crucial intervention as the country prepared for a peak in infections.

“If there is nothing to hide, why the secrecy?” asked a source close to the controversy. Close to a billion rand has already been spent on procuring 44-million units of medical equipment by B4SA using public donations and taxpayers’ money.

President Cyril Ramaphosa has announced an “extraordinary” Coronavirus budget of R20-billion as part of the socio-economic stimulus package of R500-billion.

Solidarity Fund told Sunday World this week that they were able to secure PPEs “thanks to more than R2-billion received in donations”.

B4SA has conceded that the panel that selects suppliers is not diverse and representative of the country’s racial demographics.

Sunday World has reported for the last two weeks how B4SA allocated contracts for medical equipment to companies that are mostly white-owned, prompting protests from black business groups, including the Black Business Council (BBC) and the South African United Business Council (SAUBC).

This forced the Treasury last week to decentralise the procurement of PPEs following complaints by the black business establishments that transformation and B-BBEE were being undermined. SAUBC president George Sebulela said the Solidarity Fund’s procurement of medical equipment should be done through the Treasury.

“Solidarity spend and procurement is still done through B4SA instead of National Treasury for governance and transparency’s sake. We will also schedule a meeting with National Treasury to review the pricing schedule of COVID-19 as it simply benefits large companies only and excludes SMMEs,” he said.

Sebulela said they had written to B4SA and asked to be included in the organisation to no avail.

“That to us has demonstrated [a] boys’ club mentality that we don’t accept and tolerate, hence we are not surprised by the alleged shenanigans.”

The BBC this week intensified the fight for transformation in the procurement of medical equipment, meeting with the governing party’s alliance partner, the SACP, at the beginning of this week. The two organisations agreed to work together to stop the “capture” of government’s COVID-19 interventions by big business.

“The BBC underlined the dangerous possibility of the war against COVID-19 being exploited to undermine broader social transformation,” the organisations said in a joint statement, adding that they would be “adopting a common stance against monopoly capital domination of our economy and capture of the economic value of government’s COVID-19 interventions”.

Despite several attempts by Sunday World to get answers, B4SA would not disclose the names of the “expert panelists” who awarded the contracts for medical equipment. “The B4SA selection panel was assembled during the emergency phase of the pandemic. As we move into the stabilisation phase, we continue to refine the constitution of the selection panel,” said B4SA.

Although admitting that the panel was not “diverse and representative”, the organisation further failed to explain the criteria used to assemble the team.

Presidency spokesperson Khusela Diko had not responded to questions by the time of going to press.

Former President Jacob Zuma has apologised for saying that ANC senior member Derek Hanekom is an apartheid agent. In a statement, Zuma, through his foundation,...
Read more
Breaking News

Former President Jacob Zuma’s daughter Thuthukile, who is a political analyst and outgoing chairperson as well as youth league leader, is among the seven...
Read more

Lerato Moloi refuses to be silenced