‘If the DA changes its attitude, the ANC is out’ 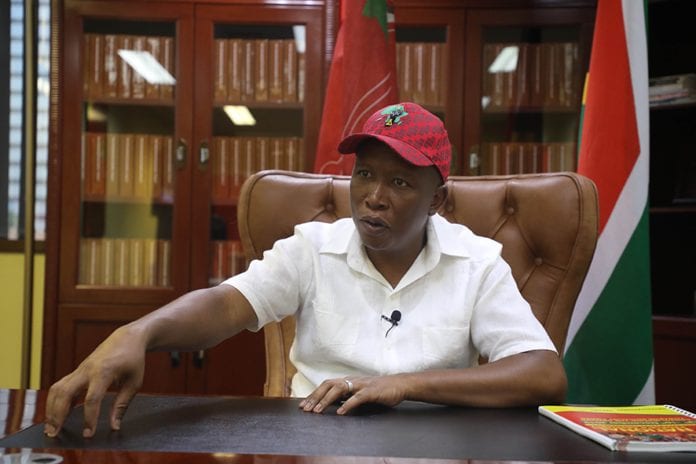 Malema swears to throw out Makhubo as Joburg mayor

EFF leader Julius Malema has warned the ANC not to celebrate its return to power in the country’s metros.

In an interview with Sunday World on Friday, Malema said his party would again work with the DA if the official opposition changed its attitude.

Malema spoke ahead of the party’s elective conference at the weekend, where he is expected to be re-elected unopposed.

His statements come in the wake of a tumultuous week, during which mayors from the coalition partnerships formed after the 2016 local elections were ousted.

On Wednesday, some DA councillors and its coalition partners voted with the ANC to give Geooff Makhubo the mayoral post of the country’s economic powerhouse with 137 votes.

Makhubo, who is ANC regional chairman, is accused of receiving millions of rand from Regiments – a company embroiled in state capture – for helping it get a lucrative tender in the City of Johannesburg before he joined the city as a councillor.

Malema said Makhubo could soon be thrown out, as the EFF would not only hold him accountable but would also engage small parties about his
future.

“If the DA changes its attitude and say they want EFF, the ANC is out. The ANC shouldn’t overcelebrate [sic], especially Geoff, because it is just a matter of time before his stories come to real life,” he said, adding talks with the ANC collapsed after the ruling party insisted on Makhubo.

Malema said they would work with any party that was prepared to share power with them in order to respond to criticism that the fighters have no experience in governing.

This, he said, will be on the principle of anti-corruption and prioritisation of black communities.

As the court overturned the decision to remove controversial Tshwane mayor Steven Mokgalapa, who was involved in a sex scandal, the EFF is smelling power.

But Malema had harsh words for the DA, after talks – with leaders including Helen Zille – on the Joburg mayor post collapsed, and accused it of white arrogance and racism.

Asked whether the ANC was becoming the “better devil” to work with, Malema said: “It is a matter of the EFF must govern, and they [ANC] are prepared to vote for the EFF and we voting for them on condition they give us power that is legislature that can be used to hold them accountable.

“There is no other devil. We’re not choosing between two devils.

“The other devil is just not willing to participate,” he added, accusing the DA of not wanting to share power in metros to consolidate its white voter base.