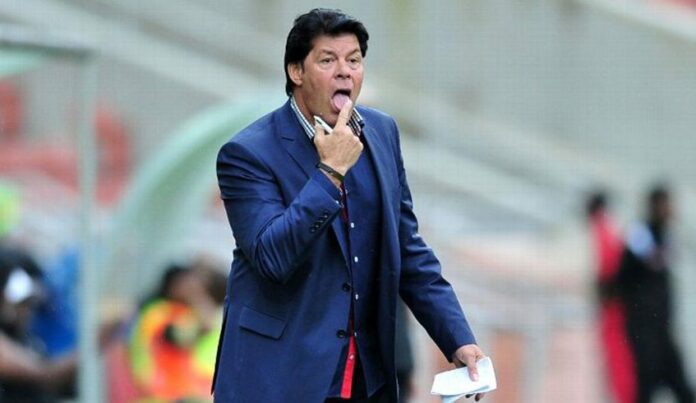 The controversial Belgian mentor, who courts controversy wherever he coaches, was given marching orders by the Tanzania Premier League side, also known as Yanga, for calling the club’s supporters ‘illiterate and monkeys’ after questioning his substitution decision last week.

The 60-year-old was also heard calling Tanzanian fans “dogs” and comparing them to “chanting monkeys”.
The SA Football Association (Safa) described his conducted as “despicable” and said it noted with “dismay” what Eymael allegedly said.

“We want to express our solidarity and support for the Tanzania FA and the Yanga FC. Our own history, principles and beliefs compels us to reject racism in all its forms,” said Safa in a statement.

Safa said Eymael’s conduct militates against Nelson Mandela’s understanding of the role of sport in our society that it has the power to change the world, power to inspire and unite people in a way that little else does.

Safa said it would take the following steps:
• To direct a letter to the Minister of Sports to bring this matter to his attention, with SAFA stated position that we will raise objection to any consideration of granting coach Eymael a work permit in South Africa in future.
• Bring this matter to the attention of world football governing body, Fifa and (CAF).
• Write a letter of solidarity and support to the Tanzania FA, assuring them of our full cooperation on any remedial steps they may consider.

“It is further unfortunate that this situation comes in the wake of the global campaign of Black Lives Matter.”

“Safca reaffirms its long-standing view that African countries, their clubs, and football associations should have a more rigorous and thorough approach when appointing foreign coaches,” the coaches body said in a statement.

“History of African football shows that very few “non-African” coaches who have worked on the continent have left any sort of positive long-lasting legacy in the development and progression of African football,” said Safca president, Greg Mashilo.

Mashilo said his organisation has always been very vocal on matters retarding the development of African coaches, who if empowered equally… could achieve much more given their familiarity with local culture and strongest characteristics.

“Eymael has a history of disrespecting Africans and African football, yet he continues to get coaching jobs around our continent, more particularly in South Africa where he was recycled within our professional clubs. There is critical need for clubs and associations to have an anti-racism clause in contracts as the Code of Conduct/Ethics, is understated,” said Mashilo.

Safca said it will be consulting Safa to propose to the government to impose a “much stricter implementation of Fifa Club Licensing System, and more importantly, the criteria for processing of and issuing of work permits to foreign coaches”.

“He [Eymael] must be banned from working not only in African football but globally so as to send a strong message to other racist masquerading as coaches.”