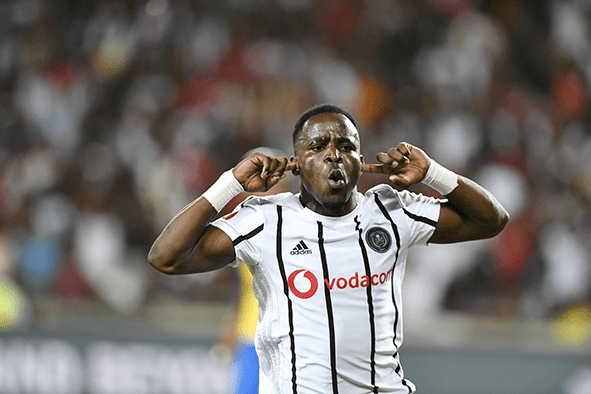 Johannesburg – As rumors intensified this past week that Orlando Pirates forward Gabadinho Mhango’s future is uncertain at the Buccaneers, the player’s agent Mike Makaab has refuted all allegations.

Sunday World reached out to Makaab, following the tittle-tattle news that the Sea Robbers are on verge of letting go of the player at the end of the season.

“I have a very close relationship with Pirates chairman Dr.Irvin Khoza, and I become the first call to be alerted when there’s fuss at the camp, he never said anything related to Mhango’s contract.

Makaab further added that Mhango has a lengthy contract with Pirates and he still has a long way to go with the Buccaneers.

When asked to confirm if the player has ongoing issues with team players and the management as reported, Makaab said he cannot comment on this stance.

The Malawian born has been making headlines for the wrong reasons recently, and has been referred to as the ‘Party Pobar’ after it was reported that he failed to settle a R26 000 bill at Club Propaganda, and later had an altercation with one of his associates.

Mhango joined the Sea Robbers two seasons ago from the now-defunct Bidvest Wits.

The 29-year-old made a seasonal feature for the Bucs, where he scooped a Golden Boot for being a joint top scorer alongside Mamelodi Sundowns striker Peter Shalulile, as they netted 16 goals respectively.