Mkhalele challenges new-look Bafana to write their own history 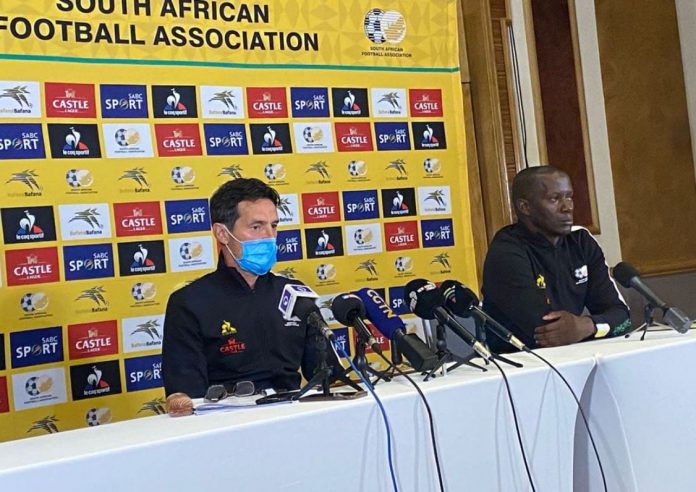 Johannesburg – Bafana Bafana assistant coach Helman Mkhalele has challenged the new-look Bafana Bafana players to write their own history, starting with the friendly international match against Uganda’s Cranes at Orlando Stadium on Thursday evening, kick-off is at 6pm and the match is live on SABC3.

The former Bafana Bafana winger said the new players called up for national duty must have first and foremost a positive attitude.

“The first victory is in the mind. With a positive attitude, normally the rest will fall into place. Have a right mental attitude, communicate with your teammates more often and above all, believe,’’ he said.

Mkhalele asked the newly-assembled team to wear the Bafana Bafana jersey with pride as they will be representing the 60 million plus South Africans.

‘’Not everyone has an opportunity to represent one’s country and when the opportunity avails itself, grab it with both hands and make yourself, your family and the country proud,’’ said Mkhalele.

Also read: Place your bets: Here’s our tips on who will be winning this weekend in Euro 2020

The technical staff of Bafana Bafana regard the Uganda friendly match as the beginning of the rebuilding phase.

‘’You can notice that 80 percent of the players are new caps in addition to that we also lost 6 players to injuries and Covid-19. The rebuilding plan also include most of the u/23 players currently doing duty for the country in Egypt.

‘’We did not include any of the u23 players on the basis that they are preparing for the Tokyo Olympics and have travelled to Egypt. We believe that this perspective is important as we will continue to evaluate all the players until we find the probable new Bafana Bafana team.”

Bafana Bafana have been hit by Covid-19 and injuries forcing the technical team to make the following changes:

You may also be interested in: South African Breweries commits R2 billion investment to SA economy