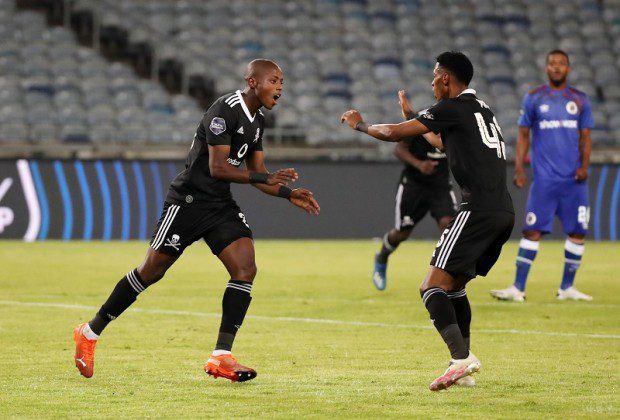 Orlando Pirates substitute centre-forward Tshegofatso Mabasa scored his first goal of the season to earn Bucs a 2-1 victory at home after trailing 1-0 at half-time to a resolute SuperSport United in their DStv Premiership tie at Orlando Stadium last night.

This was after midfielder Teboho Mokoena put Matsatsantsa in the lead with his left-foot shot from close range to give the visitors the lead after an assist by Evans Rusike following a corner five minutes into the proceedings.

But the Buccaneers replied though a penalty when defender Siyabonga Nhlapo brought down Bucs forward Zakhele Lepasa inside the box. Lepasa got up, took the spot kick and scored early in the second half.

It was evident that coach Gavin Hunt is still appraising the squad as he brought back Itumeleng Khune dislodging Daniel Akpeyi from the No1 position in his staring XI.

Akpeyi was dropped to the bench, having conceded five goals from Chiefs’ last four matches across the league and the MTN8.

It was Khune’s maiden start since his mediocre showing in the first league game of season against Mamelodi Sundowns, where Chiefs lost 3-0 at home, FNB Stadium last month.

The deadlock was broken just a minute prior to the hour-mark when Siboniso Conco converted from the spot. The resultant penalty looked dubious as Willard Katsande was adjudged to have challenged Zolani Nkombelo but the challenge seemed fair.

Chiefs answered eight minutes later when Leonardo Castro rose the highest to nod home an inviting corner-kick by Khama Billiat, making it 1-1. Castro and Billiat combined brilliantly again seven minutes after the goal to give Chiefs the lead, with Castro scoring a tap in, having been teed up by Billiat.

The visitors’ cushion was short-lived in the view that Abafana Bes’thende drew level, via substitute Nduduzo Sibiya, in the 70th minute.