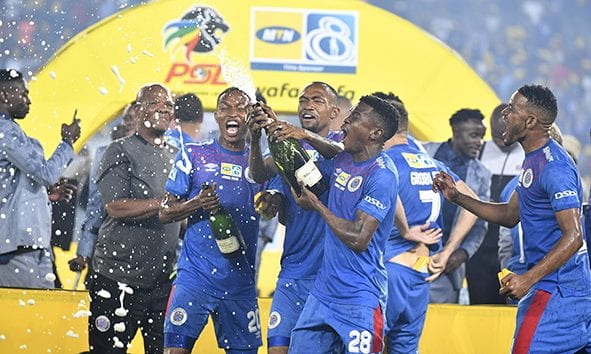 SuperSport United triumph in a game of wits.

Bradley Grobler’s lone strike was all SuperSport needed to outwit a spirited Highlands side, claiming the R8m first prize cheque for the second time in three years.

Grobler netted via a neat header from an inviting cross from Teboho Mokoena at the stroke of halftime. As both the sponsors and a long established record label celebrated 25 years of existence, backers MTN partnered with the famed music record label Kalawa Jazmee to bring about a celebratory vibe in the stands.

One of the last songs, prior to kick-off, that Kalawa A-list musos such as DJ Zinhle and DJ Oskido, among others, belted out was Professor’s nearly-forgotten hit titled Lento.

This banger that Professor featured Speedy in has the lyrics Siphila kamnandi (we live nicely) and it was quite befitting for the Wafa Wafa final as Super-Sport are bound to live nicely, thanks to the R8m in the kitty.

Though it was their first final in the Premier Soccer League (PSL) era, Highlands were no fazed by the big stage.

The Lions of the North dominated proceedings in the early stages, with Mothobi Mvala and Sphiwe Mahlangu putting in a solid shift in the middle of the park.

Speedy winger Mokete Mogaila and in-form Peter Shalulile also put SuperSport’s defence under a lot of pressure in the first half, but there was no goal to show for that superiority.

Such was Highlands’ supremacy that their coach Owen Da Gama was hardly on his feet. It was only after Grobler broke the deadlock that the coach rose from his seat to bark orders.

Last season, SuperSport lost this final on penalties to Cape Town City, having won it the previous term. Highlands brought in tried and tested duo Tendai Ndoro and Reneilwe Letsholonyane later in the second stanza.

Ndoro bombarded SuperSport goalkeeper Ronwen Williams, however, the Bafana Bafana international was, at most, equal to the task.

The Tshwane-based outfit did not work as hard as they usually do, but it was the expertise of seasoned campaigners like Dean Furman, Mokoena, Clayton Daniels and Thamsanqa Gabuza, among many experienced players, who boxed clever by keeping it simple.

ANC falls behind on rent payment