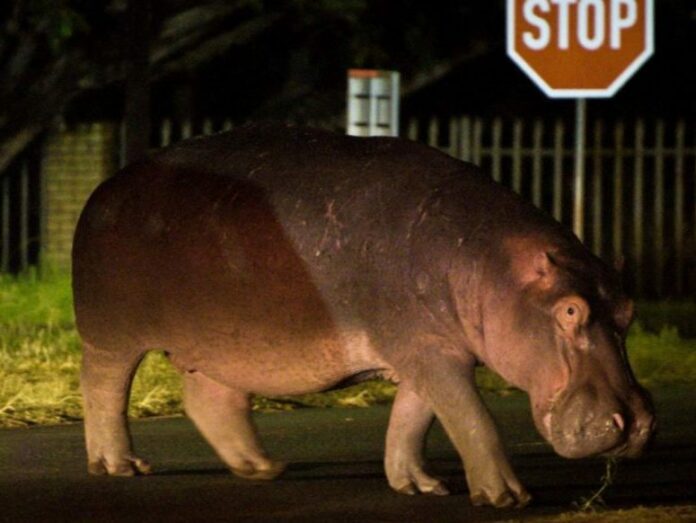 Johannesburg – One of Johannesburg’s busiest suburbs, Fourways, has a wild hippopotamus on the lose on their streets.

It is believed that conservation officials are now looking for the animal near the Jukskei River.

Officials have called on the public not to approach the hippo if they do come across it but rather to report its location.

The hippopotamus, also called the hippo, common hippopotamus or river hippopotamus, is a large, mostly herbivorous, semiaquatic mammal and ungulate native to sub-Saharan Africa. It is one of only two extant species in the family Hippopotamidae, the other being the pygmy hippopotamus.

Hippos are aggressive and are considered very dangerous. They have large teeth and tusks that they use for fighting off threats, including humans. Sometimes, their young fall victim to adult hippos’ tempers. During a fight between two adults, a young hippo caught in the middle can be seriously hurt or even crushed.

Twitter have reacted to the beast on the lose.

Take a look at some of the tweets below:

if the hippo wants to be a Fourways DJ:

Fourways is super huge, and includes a lot of natural land (Dainfern, Broadacres, far side of Lonehill and beyond there where they're still developing) so this oke could be anywhere tbh💀

#IamSingleBecause I got chased by the Hippo in Fourways while waiting for my GF to come out, now she does not believe me pic.twitter.com/cK5FNPh2pZ

No more parties in Fourways

Is it even legal, or ethical, to have a pet hippo on your Fourways property? 😵

So there's an animal galivanting through large bodies of water in Fourways, but South Africans can't do the same anywhere? The hippocrisy

This rhino is still at large around Fourways. Be vigilant guys. Black rhinos eat people. pic.twitter.com/RJ4E4hX0Io

The hippo is just minding it's own business looking for a townhouse in Fourways…
Nina hey hey hippo pic.twitter.com/sU27GSjLK4

PS: stay safe. Apparently the animal is in the Fourways area. pic.twitter.com/VK8MnB9DH0

Also read: WhatsApp will block you if you don’t agree to new data sharing policy