Naked man dragged out of his shack by law enforcement officers 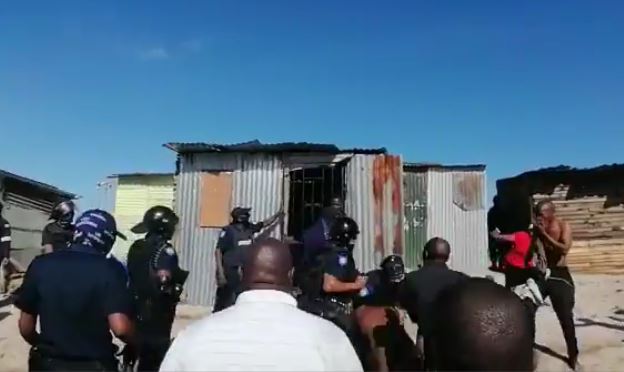 The City of Cape Town says it has launched an urgent investigation into the law enforcement officers, who dragged out a naked man from home during a City law enforcement operation in eMpolweni, Khayelitsha.

In a video that has since gone viral, the man was dragged out of his shack naked and thrown onto the ground.

In a media statement, the City of Cape Town said the actions of the officers involved are being investigated with urgency including the videos.

“Once the investigations have been completed, the appropriate action will be taken”.

“The land in question belongs to the City of Cape Town and the City has conducted various operations to prevent illegal land occupation. After removed, new attempts are made to invade again on a daily basis”.

“The land is earmarked for the installation of services to serve the broader community in the area. There is an interdict in place as well as a court order which allows only 49 households to temporarily remain on the land until after the lockdown”.

“The City must also maintain this recent court order,” reads the statement.

Social media has since lambasted the officers and calling on President Cyril Ramaphosa to intervene.