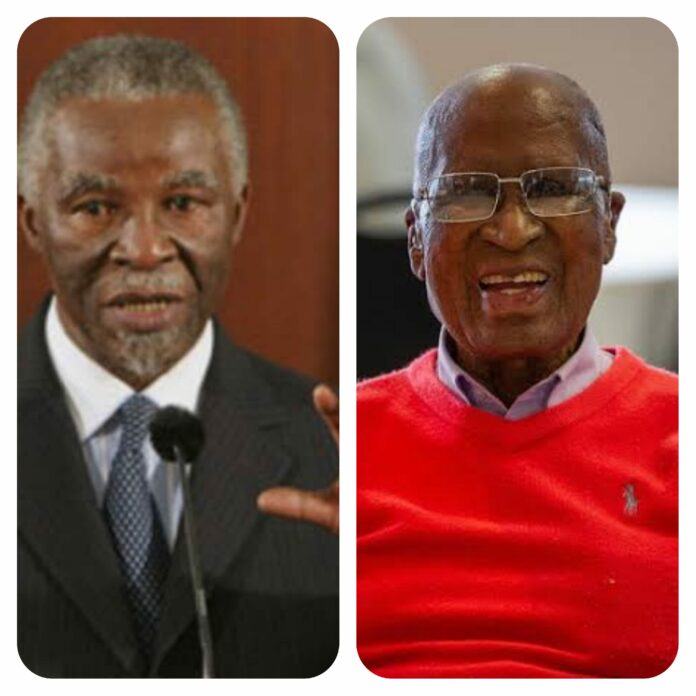 Former President Thabo Mbeki said today renewing the ANC to rid it of corruption, nepotism and arrogance among some of its leaders, will be a befitting farewell to the late Rivonia Trialist Andrew Mlangeni.

Mbeki, whose father Govan served with Mlangeni on Robben Island, delivered a virtual tribute during the funeral service of the struggle icon, who he said was unhappy about the state of the ANC when he died.

The former MP, who was until last week Wednesday the last surviving Rivonia Trialist, died at the 1 Military Hospital in Pretoria after complaining about his abdomen.

Mbeki said Mlangeni had a good reason to be concerned about the state of the ANC.
The former ANC president said the 54th national conference of the ANC in 2017 had diagnosed the problems plaguing the party, including corruption, nepotism, arrogance, elitism, factionalism, manipulating organizational processes, abuse of state power and the putting self-interest above the people.

“It will not be possible to deal with all of these various challenges the country is facing, including the matters of ethical leadership, unless we renew the ANC. I think if we seriously attend to this, it should be a very good farewell and a very good memory, a very good monument to such as an outstanding revolutionary, outstanding leader as Andrew Mlangeni,” Mbeki said.

Delivering the eulogy, President Cyril Ramaphosa said Mlangeni will be remembered as a person of humility, humanity and dignity – adding that his passing marked the end of era of sacrifice, honour and integrity.

Ramaphosa said Mlangeni, the former chairperson of the ANC’s integrity commission, was as committed to fighting corruption today as he did against the Apartheid government.

“Always faithful to the principles of his movement, the African National Congress, always true to its revolutionary discipline, he understood his responsibility to challenge the abuse of power and the plunder of resources,” he said.

“We have lost not only a great patriot but a strident moral voice,” he added.

Mlangeni was in 1992 awarded the Isithwalandwe/ Seaparankwe, the highest honour by the ANC for those who have made an outstanding contribution to the liberation Struggle.

Mlangeni, who was born on 6 June in 1925 in Bethlehem in the Free State, served 26 years on Robben Island, along with Mandela, Walter Sisulu, Raymond and Dennis Goldberg, who also recently died.

Accused No 10, Mlangeni was released in 1989 and became an MP in the democratic South Africa until his retirement in 2014.

A former trade unionist, Mlangeni joined the ANC Youth League in 1951 and was a member of the SACP and Umkhonto We Sizwe (MK).