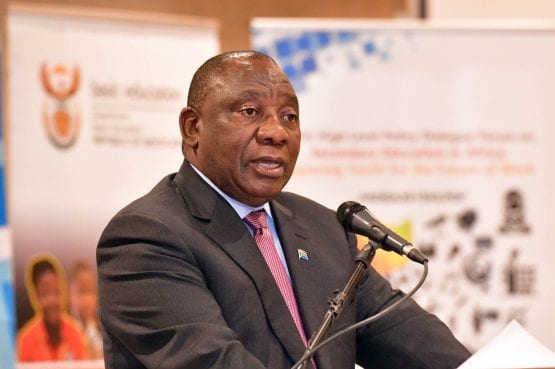 President Cyril Ramaphosa has once again thrown the gauntlet to his colleagues in the ANC, calling on them to declare their financial interests.

Ramaphosa has continued talking tough against corruption, saying his government would fight those involved in the looting of state coffers, in line with a resolution of the governing party to confront rent seekers.

The president was speaking at the opening of the virtual national executive committee lekgotla of the ANC, which started on Friday and ends today. In his political overview, Ramaphosa said his ANC office has established a “dedicated mechanism” for NEC members to declare their interests.

“We are encouraged to announce that a number of members have declared such interests and urge all other NEC members to do the same,” he said.

“As deployees of the governing party and other public servants, we call on you to serve our people diligently and with honour and integrity, We further call on you to do everything in your power to stamp out corruption wherever you encounter it,” he added.

Ramaphosa’s said his administration was finalising the parameters for lifestyle audits for puiblic represantatives in an effort to combat corruption.

Three leaders who attended the meeting told Sunday World that Ramaphosa reiterated that a line had been drawn in the sand against graft.

They said Ramaphosa had revealed that several leaders had heeded the call to disclose their financial interests. “He said he was encouraged by those who came through to declare their interests, not only at national level but also in provinces and regions,” the member said, speaking on condition of anonymity.

“He said he encourages those who have not done it to do so,” he added.

Another leader said: “He hinted that we have drawn a line in the sand and that we need to continue to fight corruption.”

Ramaphosa noted that social partners at the National Economic Development and Labour Council had also complained about corruption.

This week, the Hawks made several arrests in cases involving corruption and fraud. The elite crime fighting unit was also intensifying efforts to make more arrests in the VBS looting case.

Sunday World understands that two of the eight arrested for the VBS scandal have entered a plea bargain with the state. This means they will testify against

He hinted we have drawn a line in the sand. We need to fight corruption

their six colleagues. “There is going to be an announcement soon. There are two guys who signed a plea bargain,” a Hawks

This week, the Hawks arrested politically connected businessman Edwin Sodi and six others on charges of corruption and fraud related to the Free State asbestos saga.

Sunday World reported last weekend the Zondo Commission’s investigators believed Sodi paid senior ANC members and state officials a total of R34-million from 2013 to 2019 as his companies scored more than R2-billion in tenders.

Sources in the Hawks and National Prosecuting Authority said the Asset Forfeiture Unit was planning to attach Sodi’s bling cars this week.

The unit has already frozen the assets and bank accounts of Sodi and his co-accused in the asbestos scandal. Sodi is out on R500 000 bail, while his counterparts received R100 000 bail each.