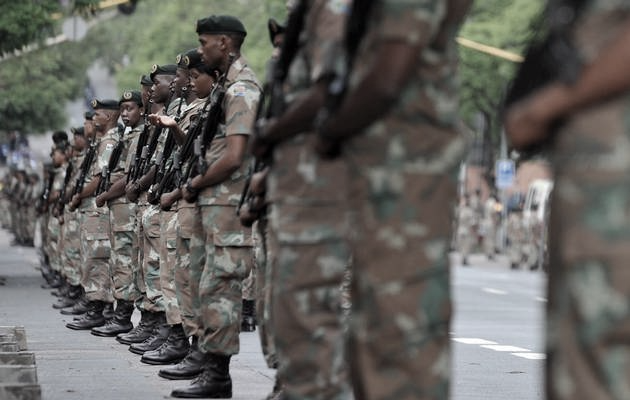 The expenditure of close to R5-billion in the unprecedented deployment of 76 000 soldiers by President Cyril Ramaphosa will need close oversight by parliament.

This is according to a leaked document of parliament’s research unit, which noted this week that the calling up of South Africa’s entire military establishment was unprecedented in post-apartheid South Africa.

Ramaphosa this week wrote to parliament’s joint standing committee on defence (JSCD), informing it of his decision to deploy an additional 73 180 soldiers coming from the regular force, reserve force and the auxiliary force, to help police to maintain law and order as the country readied for the peak in the number of cases of the virus.

This brought the number of soldiers on the Covid-19 mission to 76 000 after the initial deployment of 2 820 of the SA National Defence Force (SANDF) personnel on March 25. The large-scale deployment of soldiers, one of the biggest in the history of the country, came as the number of new infections rose to 4 361 yesterday, which was an increase of 141 cases from the previous day.

The country this week recorded the highest daily infections at 318 on Thursday. The government has decidBy George Matlala Private airlines in the country, battered by the outbreak of the novel coronavirus, have joined their sate-owned counterparts in a bid to be included in the government’s Covid-19 rescue package.

The Airlines Association of Southern Africa (Aasa) has written to the National Treasury asking for urgent intervention from government in the airline industry, following the prohibition of air travel as part of measures to curb the spread of the coronavirus in the country.

“Aviation will be a crucial role player in the South Africa recovery plan for business travel, tourism and trade and the economy in general, being an enabler for the quick and efficient transport of people and goods. Whilst many states around the world are considering aid to support their own airlines, it is important that South Africa does the ed that the country would open the lockdown over the virus in a gradual, risk-adjusted manner beyond April 30, which would see certain parts of the economy resuming activity.

“The latest letters, de facto, call up South Africa’s entire military reserve capability to deployment. This raises a number of questions that will require oversight by the JSCD,” a document from the parliament research unit states.

“The deployment figure of almost R5-billion is also significant. This represents just under 10% of the 2020 DOD [Department of Defence] budget allocation (R52.4-billion). Oversight of this expenditure will be essential not only to ensure thorough spending, but also to ensure public trust in the SANDF’s means to use its resources responsibly,” it adds.

The document was prepared for a meeting of the JSCD this week, during which Defence Minister Nosiviwe Mapisa-Nqakula gave a breakdown of how they were going to use the resources. The parliamentary research unit noted that the SANDF was already in a state of decline.

“Not only will these deployments place significant pressure on South Africa’s finances, but it will also place strain on the SANDF’s operation capacity. It should be noted that the 2015 Defence Review stated that the SANDF is in a ‘critical state of decline’.

“Since then, the SANDF has been unable to reverse the decline largely due to a lack of funding and limited internal restructuring. As such, given the operational constraints already evident before 2020, the large-scale requirements of the Covid-19 deployment will test the SANDF’s capabilities to its maximum,” the unit added.

The deployment of the soldiers will be until June 26. JSCD co-chairperson Cyril Xaba said they were satisfied with the department’s reasons for the deployment of extra resources for Covid-19.