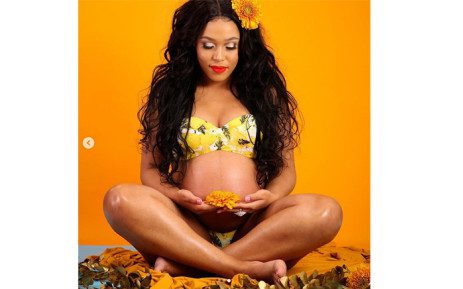 Actress Simphiwe Ngema, widow of slain actor Dumi Masilela, has sparked an immense public outcry following her announcement that she had moved on and was expecting her first bundle of joy. It later emerged that she had already given birth.

The former Muvhango actress broke the internet last week when she announced that she was expecting her first child with model and television personality Tino Chinyani. Ngema showed off her baby bump in a stunning yellow bikini in a photo shoot shared on social media.

She wrote: “Indeed there is a God in heaven. He wiped away my tears and gave me joy in abundance. You’ve brought hope and purpose to my life.” Chinyani also took to social media and shared: “Lord knows how long I prayed on this moment and to be answered in the most beautiful way possible. I thank the Lord up above that you blessed me with your presence and showed me who I could truly be, and for that I’ll forever be grateful.” He promised to always be there for Ngema and their child.

“For this gift you have given me, I promise I will always love, care and be there for you and our seed. May our seed grow to be a leader of change, a leader of hope and serve the Lord in all the ways. My legacy continued, my mini me.” Taking to her Instagram account on Thursday, the Bones of my Bones actress wrote: “Because joy comes in the morning, I’m gonna sit here and let the sun shine on my face for a moment. Thank you for all the well wishes. There is a God in heaven.”

Sunday World learnt through a close friend of the couple, who did not want to be named, that Ngema had given birth last week and was basking in motherhood. “Simz gave birth last week and is at home with her family. People need to understand that she was unsure about how she would reveal this, especially because she had to mourn her husband so publicly. But this new gift of life for her is something she is happy about and people just need to accept that she has moved on,” said the friend.

Ngema did not respond to texts and phone calls at the time of going to print. While many on social media were celebrating the couple’s love and their newborn baby,
others were attacking her for moving on too quickly. Masilela died after he was shot in an attempted hijacking in Tembisa in 2017.

Tshwane-based clinical psychologist Anthony Nhlapo explained that there is no right or wrong way to grieve, but there are healthy ways to deal with loss. He weighed in on what might seem uncomfortable for the many social media users who had much to say about Ngema’s announcement. “In therapy we normally note significant improvement six months after someone has experienced a loss of a partner. In some cases, people show improvement after 12 months.

“We need to emphasise that there is nothing wrong when someone recovers earlier than what other people expected. The grieving person will normally go through stages of grief in a cyclical way and eventually get to a point where they accept the loss. This is where the person will feel that they have healed and need to move on.”

In the eyes of many, Ngema is still seen as Masilela’s widow, which is why they find it difficult to grasp the changes in her life. “The challenges faced by widows who are ready to move on are caused by societal expectations and pressure. Unfortunately, widows are treated differently compared to widowers. This is reflective of a society that puts more pressure on women and makes them feel that they owe allegiance to their in-laws,” added Nhlapo.

According to experts, by culture, the widow has a right to move on after the ceremony where they literally remove the mourning gowns that she has been wearing since the burial of the husband. The mourning gowns are also burnt during this ceremony.

“Also, the widow is cleansed in order to remove the blood of her dead husband, which the elders believe that it is still active in the woman’s veins. A widow is prohibited during this period of cleansing from engaging in any sexual relationships because it is believed that it will be dangerous for the men she is sleeping with, this is believed that it can also result in death of the new lover.

“If the widow completes the cleansing ceremony and both families [her family and her inlaws] are satisfied about it, the family can then allow the widow to move on,” Danke continued. “Widows are human beings too, and they have basic needs to be met in order for them to be fully functional in society. What society needs to know is that when a young widow loses her husband through death, her life takes drastic changes. Widows become single and lonely again. Some widows are forced by circumstances to live in poverty. In some cases, widows lose their close friends because they are perceived to be a threat in their marriages.”