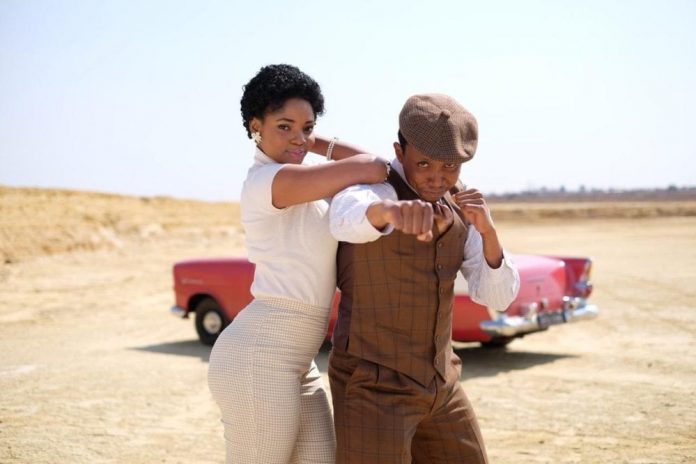 Moneoa Moshesh shines in the local film, Back Of The Moon, where she portrays Eve in the lead role.

It is her first feature film role.
Like the rose that first bloomed in 2012, Moshesh says her garden is again abundant with good fortune. Her journey over the last two years is testimony that she was made for this feisty songstress role. She released a jazzy album, Ziph’Inkomo , reminiscent of the Sophiatown jazz era, last year.
She also believes playing Dodo on the Mzansi drama, The Road, secured her the part.
Based on Angus Gibson’s theatre production Freedom Square and Back of the Moon, Moshesh says Gibson was taken with the similar character.
“I’ve always admired the 1940s and 1950s era. The way of life back then fascinates me,” explains Moshesh.
“It felt like I was reincarnated as my grandmother. A truly fulfilling experience from the lingo to the fashion, the music.
It was absolutely amazing.”

Her portrayal of Eve opposite Badman (Richard Lukunku) helped the film score Best South African Feature Film
award at the Durban International Film Festival last month. She says the experience during filming was surreal, as
she felt like her spirit was reincarnated into the body of her grandmother.
It is based on life in Sophiatown in the 1950s –a time when forced removals were at its peak, gangs were fearless and jazz and dingy clubs boomed with black talent.

Moshesh says she and Eve are similar in many ways. “Eve has daddy issues. I can relate to that. She has a yearning to experience love, especially from a man. The one man who should’ve been an important figure in her life wasn’t really there and there’s been a void in her heart since.
“She’s also smart and understands what she needs to do to survive. She works hard, she’s
ambitious and she’s focused.

“She’s strong and empowered but also gracious and extremely vulnerable. I’d say that just about covers a lot of aspects within myself.”
But she says unlike Eve, she is certainly no walk-over.
Born in Mthatha in Eastern Cape and raised in Durban, the 29-year-old first soared to fame with the debut single, More
Than You.

She is grateful that as an actress she is able to explore both passions.
“I’ve definitely fallen in love with pretending to be other people. So yes, I will certainly pursue it [acting] further. And music will continue being a part of me. I’ve always had a slow but gradual relationship with my music career.
“I really don’t want to live my life in the fast lane, so career management is key.
“I’m currently in studio working on my fourth album but I’ll release it when my acting career isn’t so demanding so that I can fully commit to the promotional work.”

She was also one of five African artists selected to be part of the Global Goals campaign by the UN and distributed through Unicef, which sets
out to empower young girls across the globe.

Amajita held to a 2-all draw by Zimbabwe