The honour is yours Sir, Dr Motaung! 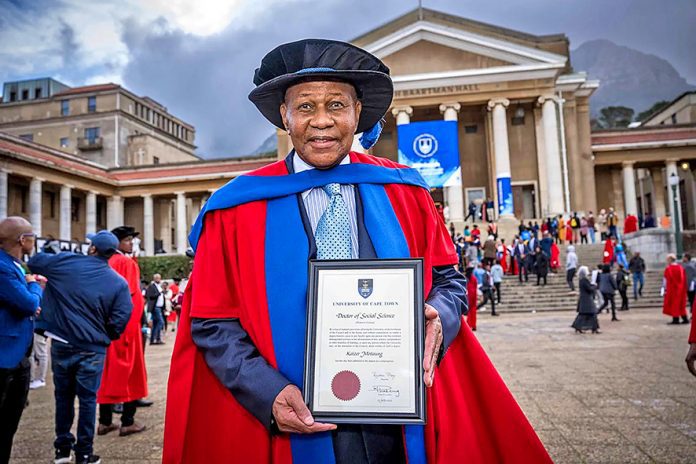 There were poignant scenes at the University of Cape Town last week as Kaizer Chiefs el supremo Kaizer Motaung was bestowed with an honorary doctorate.

Crowds who descended at the venue broke out in song and danced as Motaung stood still as he watched even academics, including members of the senate joined in song.

Very few people, maybe those in his inner circle, are familiar with the monicker Boy-Boy Motaung, the name Motaung used to go by while playing for Atlanta Chiefs in the US.

The name comes up in an archived team picture caption, with Motaung seated on the left-hand side of the front row, with his teammates at the American football club. He named his South African club following his successful playing campaign at Atlanta Chiefs.

Motaung, the founding father of Kaizer Chiefs FC, has been touted one of the first live and in person recipients of an honorary PhD since the start of the coronavirus pandemic.

Said the university in its citation: “Motaung played a crucial role in the establishment of the South African Premier Soccer League. His contributions have impacted positively in the lives of ordinary South Africans for whom Kaizer Chiefs symbolises hope, dignity and togetherness.”

Popularly known as Chincha Guluva, he founded Kaizer Chiefs in 1970 and turned it into a multi-million-rand institution revered worldwide today.

But it was while he was in Atlanta in the late 60s and early 70s that he made his mark when he debuted for Atlanta Chiefs as a substitute in a friendly game against Manchester City.

In his maiden appearance, Motaung scored a brace, marking one of his most startling appearances as a striker from apartheid South Africa.

To crown that showing by the youthful Motaung, he also received the Rookie of the Season award after scoring 16 goals in 15 matches and with four stunning assists to his credit.

According to presidency.gov.za, the 16 goals record “remain the highest number of goals scored in a season playing for Atlanta Chiefs as an outdoor team. They soon were changed and adapted to an indoor side in the 1980s.”

Motaung was one of the campaigners to have white and black footballers playing together during apartheid and achieved that goal in 1978.

Although his efforts of establishing his own club on his return to South Africa did not go according to his wishes, Motaung persevered until he was rewarded when Chiefs began to take shape, as he assembled a mix of veterans and young players to mark what has become one of the most recognisable football club in the country, with its gold and black colours.

To date, Chiefs prides itself as one of the most successful football brands on the continent, winning more than 100 trophies and accumulating a support and fan base of more than 14 million followers. Motaung dynasty is about family

Kaizer Motaung, the chairman and founder of Amakhosi, born on October 16, 1944, in Orlando East, Soweto, is a family man.

He has been married to Valeta Julegka for over 40 years, and they have four children who form the Motaung dynasty at Chiefs as they are deeply involved in the day to day running of the club that has come to be known as the “Kaizer Chiefs family”, encompassing its millions of fans.

Over the years, Motaung’s son Bobby has worked as the football manager. Daughter Jessica is the commercial and marketing director, son Kaizer Jnr is a former footballer and the club’s sporting director, and daughter Kemiso is head of digital.

Bobby, 52, has had a love-hate relationship with hordes of Amakhosi fans after he declared in 2011 that the club was a “family business” when supporters called for him to step down, accusing him of meddling in the signing up of players by overruling coaches. He received a lot of backlash for his comments as the fans believed he was partly responsible for dry spell of not winning trophies over the last seven seasons. He finally came out to clarify his utterances

In May, Jessica, 48, a former beauty queen, was appointed to the Confederation of African Football’s Organising Committee for Women Football Standing Committee from 2022-2024. She’s had a successful career in marketing and in building the Chiefs brand.

Kaizer Jnr, 40, is a former footballer, spent the 2007/08 season in Europe with German Second Division outfit, 1860 Munich before returning to play for Chiefs.

He is touted to succeed his father as chairman.

Kemiso, 32, oversees all things related to the club’s website.

Following Banyana Banyana’s Wafcon victory, she announced that the long-awaited Kaizer Chiefs women’s team will be launched this season. From founding his own club to being the founding member of the National Soccer League (NSL) that later became known as the PSL, Kaizer Motaung has come a long way as a football administrator.

On his return after pursuing his dream as a player and offered a stint with Atlanta Chiefs in the US, he formed his own club, Kaizer Chiefs.

Motaung cut his teeth as a football official with the old National Professional Soccer League (NPSL) founded after the merger of the “white National Football League (NFL)” and “black NPSL” football organisations in 1978.

But it was not long that a dispute among members of the NPSL executive committee raged, under the chairmanship of George Thabe.

This culminated in “big” clubs, including Kaizer Chiefs, Orlando Pirates, AmaZulu, Golden Arrows and Durban Bush Bucks, throwing their lot with the breakaway group, under the leadership of Roger Sishi and later under the chairmanship of Leepile Taunyane.

Motaung was one of the founders of the NSL in 1985, which attracted a number of sponsors, including SA Breweries’ Castle Lager brand as the league sponsor, JPS, Mainstay, Rothmans and a host of others.

With Motaung at the helm as the head of the finance committee, the NSL strived. In 1996 it established a trading wing known today as the Premier Soccer League (PSL), that Motaung co-founded with Irvin “Iron Duke” Khoza, as its first chairman.

Motaung has remained and continues to play a pivotal role in the NSL/PSL finance committee as its head and besides managing to attract sponsors for the league.

Chiefs have attracted the highest number of backers and sponsors in the country from the time of Iwisa as their title sponsor and the sponsor of the NSL’s Charity one-day tournament, to Vodacom, that also sponsors Khoza’s Orlando Pirates, and the two are known as the Soweto giants.

Motaung’s contribution in serving South African foot all is at times underrated as he’s not one to blow his trumpet.

Besides serving in the NSL and Safa executive committees, he was one of leading campaigners to bring the Fifa World Cup to our shores, both during the bid for the 2006 edition and the successful 2010 South African bid.

He was a member of the Local Organising Committee (LOC) established to oversee the 2010 World Cup, a football spectacle that was declared one of the most successful Fifa World Cups ever.