Isibaya actress Lerato Mvelase and former Generations actress Winnie Ntshaba are reeling in shock after discovering that they put themselves in harm’s way when they partied up a storm with an alleged serial rapist.

The man, who is accused of raping his medical doctor wife, his niece and domestic worker, was invited to Ntshaba’s 44th birthday party which was held at Belabela, Limpopo at the end of last month.

Mvelase said the man hit on her when they met at Ntshaba’s do but she rejected him. 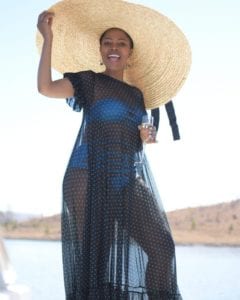 “He told me that he had the hots for me but I told him that I was not interested in him because he had this weird energy in him that I didn’t like. He repeated his advances for the second time but I just ignored him,” said Mvelase.

“The following day, he WhatsApped me the pictures that he took with me but I just deleted them. I’m so shocked because I could have been this rapist’s next victim.”

She also said she was upset with the guests who invited him. “How could people possibly put us in that space? I’m a mother and a woman, and I don’t want to be associated with such people. The guy was invited by Winnie’s friend whom she invited to celebrate with her. As a woman who puts the interests of women first, I want to attend this man’s court appearance and be among those who oppose his bail application.”

Ntshaba also insisted that the suspect was dragged along by one of the guests she had invited. “They told me the guy was going through a divorce, was stressed and wanted an outing to feel light. They said those [rape cases] were just allegations.

“I honestly didn’t know who this man was, I would have not allowed him to join us. I’m so shocked because I could have been his next victim,” Ntshaba added.