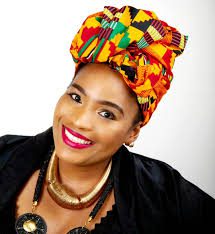 Isibaya actress Ayanda Borotho is flying the South African ag higher during the uncertain times of the Coronvirus following her nomination for the United Nations Most Influential People of African Descent, Under 40, Global 100 List.

Borotho, who was locked up at home during the national lockdown period, said she was humbled by the recognition. Among other prominent personalities previously awarded is Black Panther lead actor Chadwick Boseman and the Duchess of Sussex, Meghan Markle, in 2018.

“It’s humbling. I think what it has certainly done for me is cement the ideology of ‘a new normal’ that everyone keeps talking about at this time,” she said.

Honorees are decision-makers in over 60 countries worldwide and are selected based on political clout, business acumen, social media following and humanitarian endeavors in support of UN International Decade for People of African Descent.

The actress, author of best seller Unbecoming To Become, philanthropist and activist, added: “Activism is not just about being on the ground, but it can manifest in different ways. The norm of activism itself is being redefined.”

Borotho is best known for playing the role of Nomzamo in the SABC1 sitcom Nomzamo since 2007. She has since played many roles in popular television productions like Soul City, Home Aairs, and her current leading role as Phumelele on Mzansi Magic’s award-winning drama series Isibaya.

This nod comes before her work as the director of Phatha-Africa was publicised.

Phatha-Africa is an initiative that includes the Between Brothers for Boys and The Becoming Space for Girls programmes; which equip young people with life skills through workshops covering personal, spiritual, and leadership development, and facilitate inter-generational exchange through mentorship programmes.

Kylie Jenner is the highest-paid celebrity in the world having taken home a cool $590 million this year, followed by Kanye West with $170...
Read more
Covid-19

To those South Africans who have been thirsty for a church service, the time has arrived to quench their thirst. Brand South Africa announced...
Read more