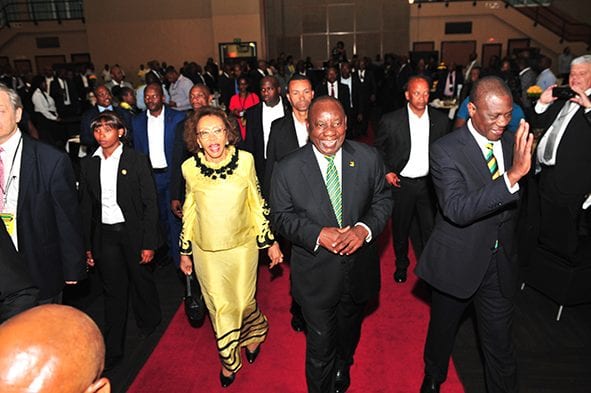 Motsepe falls on way to motorcade
President Cyril Ramaphosa’s wife, first lady Dr Tshepo Motsepe, fell as she walked out of a luxury hotel in Kimberley – raising concerns about the president’s security detail and, in this way, lifting the lid on the ferocious turf war in the presidential protection service (PPS).
Sunday World can reveal that on Sunday January 12, Motsepe fell to the ground at the Kimberley Anne Hotel on her way to the presidential motorcade after she was let go by Ramaphosa.
The commander-in-chief and Motsepe were leaving their place of accommodation on their way to the Christian Revival Church in Kimberley, a day after delivering the ANC national
executive committee (NEC) message at the Tafel Lager Stadium.
A source privy to the incident accused the unit, led by Major-General Wally Rhoode, of negligence and compromising the security of Motsepe.
“Where were they? They were supposed to be near her when she fell. They were sleeping,” he said, speaking on condition of anonymity for fear of reprisals.
“How can the first lady fall under their watch? But a senior member of the unit said Motsepe’s fall could not be attributed to negligence but her medical condition. The first
lady has had surgery in both her knees,” the officer said.
Motsepe also has had a fraught relationship with the security detail.
“The context is that the first lady is an independent woman. She has a problem with the security guys because when CR was deputy, there was no focus on her. So she has trust issues with the guys,” he said.
“On the day of the incident, it was her husband who let go of her hand when they were walking. She was still recovering.”
The member also noted that they have had to rein in the first lady over matters of security, because at some point she used to drive herself to places of her choice.
“It was not the first time she fell; she fell in Brazil,” the officer said.
The officer said there was a “big fight” in the unit between the remnants of the old guard – those who guarded Zuma – and the new guard, the members who came with Ramaphosa from his previous position as deputy president.
So big are the trust issues that when the president goes to KwaZulu-Natal, Rhoode is said to make sure he mixes the officers in Zuma’s home province with those from Gauteng.
A source close to Rhoode said the old guard was pushing for the incident to be investigated although it was known that it happened due to the first lady’s medical condition and not because security was lax.
He said the unit – like crime intelligence and state security – had been politicised during Zuma’s tenure, and that Rhoode was cleaning it up.
Presidency spokesperson Khusela Diko confirmed the incident, saying it was not a security breach but rather “an unfortunate accident”.
“Dr Motsepe had a knee operation in 2018 and has had some difficulty when using stairs since then. Fortunately, it was not a serious incident and the first lady did not sustain any injuries,” she said.
“In line with standard protocols within the Presidential Protection Service, the incident has been recorded as such in the Incident Book. The Presidency has no reason not to trust the
Presidential Protection Service,” she added.
Diko said Motsepe’s relationship with the unit remained professional, cordial and friendly, adding that the rst lady driving herself was not unique to
her.
“A lot of principals to whom security detail is provided often long for their independence and personal space. Dr Motsepe does at time wish to drive herself in her own car.
“This does not in any way infer bad relations with the security detail,” she said.
SAPS national spokesperson Brigadier Vish Naidoo said they do not “comment or provide details on personal security of VIPs (Very Important People).”
By George Matlala