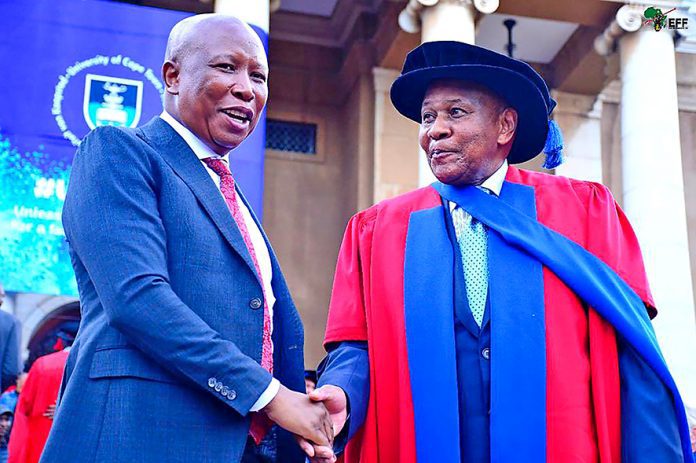 Kaizer Chiefs chairman Kaizer Motaung has credited the conferment of his honorary doctorate by the University of Cape Town (UCT) to EFF leader
Julius Malema.

Motaung was awarded with a doctor of social science degree (honoris causa) by UCT for his contribution to South African football last Friday. In an emotional letter penned to Malema last week, Motaung credited his recognition to the firebrand politician and his party.

Malema has for the past few years called for the recognition of Motaung, whose team is the biggest in the region, by awarding him a doctorate for his contribution to local football, which played a role in economic growth, poverty alleviation and job creation.

“I want to acknowledge the prior call you have been making to the higher education institutions to honour my contributions with a doctoral degree. I noticed your resounding response via public pronouncements when it became known that UCT invited me to receive the award, and I appreciated that too,” Motaung said.

“You took time out of your busy schedule to grace the momentous occasion. Your presence was felt, and so was the red army who created the celebratory atmosphere with song and dance … My family and I, wish to once more express our gratitude to you,” said Motaung.