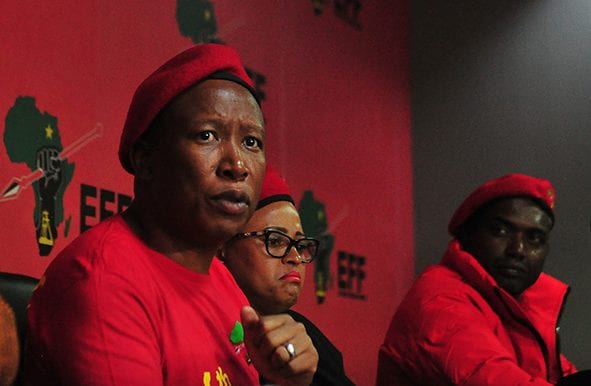 Gauteng EFF leader Mandisa Mashego shocked her supporters when she removed all her personal belongings from her legislature office on Sunday, sparking fears that she was leaving the party amid tensions with party commander in chief Julius Malema.
So serious were the tensions that Mashego didn’t even accompany Malema and party spokesman Mbuyiseni Ndlozi to Parktown Boys’ High pupil Enoch Mpianzi’s funeral in Joburg on Saturday last week.
Mashego also didn’t attend the party’s strategic planning meeting, the plenum, which started on Monday and ended today. The gathering was attended by regional, provincial and national leaders.
Sunday World can reveal that Mashego blitzed into her office and packed all her personal files, her framed photos and books, which she took home.
EFF members close to Mashego said the decision to remove her stuff was precipitated by a tweet posted on Saturday last week in which Malema told former Joburg mayor Herman Mashaba that he was aware that two of his provincial chairpersons were talking to him in a bid to join Mashaba’s new party.
Malema encouraged Mashaba to expedite the negotiation with the chairpersons, whom he did not name, so that they could swiftly leave the red beret brigade.
“I’m told one or two of my provincial chairpersons, one from the inland province and one from the coastal province, are also speaking to you. Please speed up the process,” reads the tweet.
The members said Mashego took umbrage at Malema’s tweet as she construed it to mean that she and EFF KwaZulu-Natal leader Vusi Khoza were talking to Mashaba.
Mashego was the only inland EFF leader who didn’t support Malema’s #matorokisi slate at the party’s elective conference in December while Khoza also did not toe the party leader’s line.
Mashego’s faction wanted her to be secretary-general. An EFF leader said Malema’s announcement was not only designed to discredit Mashego and Khoza for not supporting his faction, but also to discredit them.
“She said she was also tipped off that the new leadership of the EFF wanted to remove her as EFF caucus leader,” said the party member who chose to remain anonymous as she was not allowed to speak to the media.
Another EFF leader said of Malema’s tweet: “The CIC is extremely connected, what he says we take it as the gospel truth because he has never misled us.”
In move that has raised eyebrows that party has also recalled all its provincial secretaries from the legislatures to serve full time in the organisation’s provincial headquarters.
EFF spokesman Mbuyiseni Ndlozi said Mashego was not even a discussion in the plenum.
“The party cannot dismiss any member without following due process, I think she has her own issues,” he said. Ndlozi also confirmed that the provincial secretary who serve in the legislature would now work full time in the party’s offices.
“There is not scandal here, these were the resolutions taken at the National Assembly,” he said.
By George Matlala